Guilty by Association: The Burning of America

June 02, 2020
As protestors and rioters take to the streets to avenge the murder of George Floyd, we find "justice" being sought through the most vile and irrational of means. Whereas George Floyd's apparent death serves as another example of police brutality in the United States, the protestors and rioters have mutually directed their frustrations at their fellow man, where they've disrupted daily life, assaulted fellow citizens, and destroyed their property and businesses. Whereas the case of George Floyd originally sparked nationwide agreement about the negligence of law enforcement in America, the protests and the riots have once again succeeded in dividing the country; of course, a guilty government and its accessories always prefer it that way.

By all appearances, this is just another repeat of the Kavanaugh case with a twist; in this case, however, we have a criminal who's undoubtedly guilty of manslaughter, but whose crime has been embellished to represent something bigger and more useful to the political establishment. Even in the absence of any evidence that the criminal was racially motivated, Leftists stand prepared to leverage the case as an example of the popular preconceived notions: "We must sacrifice this criminal and the truth for the glory of God!" In this case, the Leftists' God is that set of preconceived notions against which truth and evidence never stand a chance. In their minds, even if any man is innocent of any charge, he is a worthwhile sacrifice for the cause. Because of this implacable trend, a great measure of America's problems stem not from some difference of opinion, but from its disagreement on facts.

In modern America, indifference to fact verges on herd immunity; where the average person has become virtually impervious to the truth, the rest are simply allergic to it. And their present circumstances serve only to exacerbate the trend.

Most Americans, especially now, are particularly unproductive with their spare time, of which they currently have plenty. They awaken each morning to few responsibilities, so they leap at every opportunity to concern themselves with events and challenges that offer them a sense of purpose; regardless of their merit, the modern American stands ready not to question the legitimacy of any movement, but to urgently partake so long as it requires little more than keystrokes. With the benefit of so many sedentary and unemployed Americans sitting comfortably behind their television and computer screens, at the drop of a hat, or with the click of a mouse, you'll have a coalition of busybodies ready to do your bidding as soon as you've made it all public. They've got nothing better to do anyway.

Any movement claiming that "           lives matter" presupposes that some meaningful segment of society stands to disagree. In the context of modern America, a paucity of any such evidence invalidates that presupposition, leaving the movement with little to no audience, strictly because everybody is already in agreement anyway. What, then, can be gained by the protests and the looting directed at the people who are already on their side? The answer is found in the political advantage enjoyed by those seeking to polarize public opinion and aggrandize their position during the upcoming election.

Of course, this is merely from the macro level; at the micro level, there are plenty of people who buy into the mythologies and the propaganda, and they combine with a host of others, who are merely discontented with their lot in life, to form a formidable mob just waiting to be galvanized into action. For many of them, the movement is just an excuse, and a convenient justification, to rage against the people they hate and to dismantle that society they've come to envy. While they hide behind notions of compassion and unity as they loot and besiege their cities, they're truly out to pummel their enemies into submission, to destroy everything they've come to hate, not limited to the people actually guilty of the crimes, but rather anything and anyone associated with them. 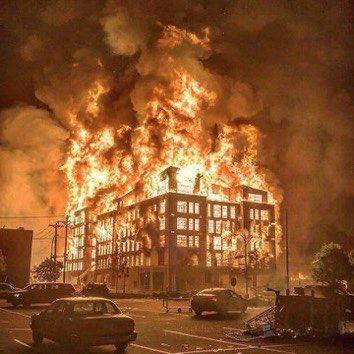 In the end, we find ourselves dealing with the unavoidable course of human nature, which drives peoples apart as they erect a common, even imagined, enemy; throughout the course of history, the pursuit of power has driven mankind to vilify those who have it. In this case, it is the pursuit of wealth that drives the animosity. Where we find unrest today, the protests and the looting have nothing to do with what is right or just; they’re just an assembly of activists, politicians and opportunists in pursuit of their own personal wants, who will exploit any excuse and any opportunity, who will tear down anyone and anything to get their way.


There is something in human nature that brings people joy when they’re faced with an opportunity to subject others to the kind of misery they have experienced in their own lives. Whether through public execution, riotous protest, religious sacrifice, public trial or some violent sporting event in ancient or modern times, there is some part of the human being that finds fulfillment in the humiliation of another, whether to even the score as he sees it or to improve the way he feels about his station in life.


The fact that there is so much dissatisfaction across America comes as no surprise, as the youth are never taught how to seek fulfillment in their lives; rather, they're compelled to chase dreams with debt, as they're force-fed mythologies and simplistic narratives about the virtuousness of victimhood. They're taught that the world is some sort of fixed pie whereby the so-called "haves" made their way at the expense of the "have-nots."

It's no coincidence that they feel righteous in "evening the score" by taking "what's theirs" from Target, Louis Vuitton, and other stores across the country.

Due to this, most of the riots and unenlightened protests are the consequence of public schooling, underachievement, and an Instagram generation too distracted by a compelling photo opportunity to acknowledge the consequences of their actions in reality.

Ultimately, these riots have nothing to do with George Floyd. They have everything to do with selfish opportunists getting their way — and some loot in the process — while utterly annihilating their enemy: America, and anything associated with it.