Recent news reports released out of Santa Cruz, California, suggest that some members of the public are finally fed up with the ongoing lockdowns, mask mandates, and restrictions on our daily life.

The latest news report covers a group of Santa Cruz shoppers attempting to patronize local grocery stores without wearing any masks. Asked to leave by employees, the mask-less shoppers reportedly insisted on making their purchases, insisting that they have a right to shop freely at any business open to the public, that the mask mandates are unlawful, and that the public is following orders by officials who don’t have the authority to issue them:

“There is no law passed by the legislature requiring anyone to wear a mask. Contrary to popular opinion, any store open to the public cannot unlawfully discriminate by requiring customers to wear a mask.”

According to the report, in what has been called Operation Cash Drop, “The group is seen picking items, documenting the prices and placing money on the checkout counter, but the store refuses to help or serve them and takes the items back. After a few minutes of arguing, the group leaves.” 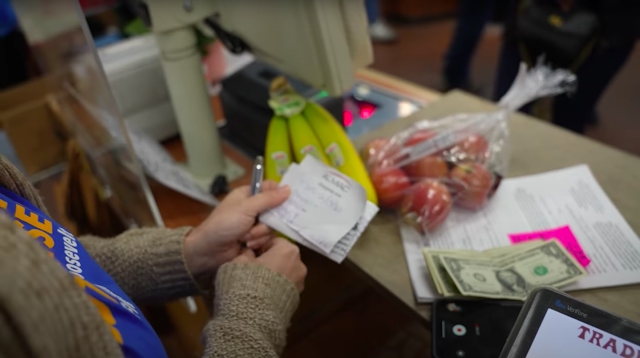 According to Santa Cruz Police Chief Andrew Mills, who contends that private stores can refuse service, “This is not acceptable in our community and we’re going to take aggressive action when we have the opportunity to do so.”

This is a complicated issue, to be sure. While there is no such Constitutional right to assemble or shop at any establishment, as that would necessitate an infringement upon the right of the owner of said establishment to refuse service, political precedent has clearly been set in denying these rights to business owners under given circumstances. Where a business owner is deprived of the right to deny service on the basis of ethnic, religious or other differences, those protections should, and can be reasonably assumed to, extend to those peacefully patronizing any business. Whereas we cannot deny the inherent right of self-ownership, and thus the right to withhold service, we must recognize that precedent has already made a terrible mess for us as a society, one which we will have to reconcile sooner or later.

Short of people taking a stand like this in the face of tyranny and ostracism, we stand to lose our society along with the freedoms which once brought us together, along with the common decency which once made society tolerable.

In addition to that, the political class has fooled the people into unquestioning compliance with unlawful mandates, bringing the political battle to us nearly everywhere we go. In order to remain in compliance, or in some cases in order to contribute to the cause, employers, employees and patrons alike generate the illusion of social consensus.

In my estimation, where private enterprise no longer reserves the power to reject the government’s imposition, it is no longer private property; in effect, the business is already under the ownership of government, acting as agents on its behalf. In this way, private property rights have already been suspended for the benefit of the political agenda, precisely where they are of little benefit to the people — as evidenced by the present trend.

The brilliance in all of this is that the government forces “private enterprise” to comply with their orders, and, as evidenced here, they can convince the public that it’s just private enterprise making its own decisions. Regrettably, we are now living in a world where government has its tentacles in virtually every aspect of life, and yet in this way, government is everywhere yet nowhere at the same time: in this way, it pulls the strings as it hides sheepishly behind the curtain.

In this way, that which is termed private enterprise has become yet another arm of the government, only under the familiar names of businesses. They can pretend that private property rights remain intact, along with freedom and free enterprise, but they are intact only insofar as they seek to preserve the status quo or selectively advance the political agenda.

Put another way, private property rights are relevant to the political class only where those rights, in this case exercised privately by virtual agents of the government, stand to threaten liberty in some specific way. Mind you, these agents acting on behalf of government are not explicitly on the government payroll, but they are penalized for any refusal to obey that government's commands, regardless of their standing in law.

In this way, they are truly agents of the government, and thus enemies to freedom and the public liberty. Remember, the virtue of government, insofar as it claims any virtue whatever, is in the goodness of law, not in the pronouncements of mortal men.

Where the people have conceded or acquiesced to their government because of the illusion, it is incumbent upon us to break ranks in support of the public liberty and that common decency which connects us. In this way, because of the manner in which we now interact as a species, and for the hope of a future of free and peaceful coexistence, it is incumbent upon us to risk upsetting the status quo, to remind our neighbors of what it means to be human, to come together to resist the government's imposition, and to endeavor to restore our way of life. In our further acquiescence, there is only more tyranny and less of humanity.