After the Dallas Cowboys' 17-23 playoff loss against the San Francisco 49ers on Sunday, the sports world couldn't help but ask the question: What's the ultimate reason for the Cowboys' 26-year Super Bowl drought? The explanation is a bit nuanced, but the answer is fairly straightforward: team owner, president and general manager Jerry Jones.

It doesn't take a forensics team to map out the events of the past twenty-six years. It wasn't Colonel Mustard with the candlestick or the lead pipe. It's actually much simpler than that: it was Jerry Jones who killed the Dallas Cowboys.

Since the day that he fired the beloved Tom Landry, Jerry Jones has chased away every good coach who's entered the building, and he's singlehandedly compromised the identity and destroyed the culture of the organization. The firing of Tom Landry was just the beginning. 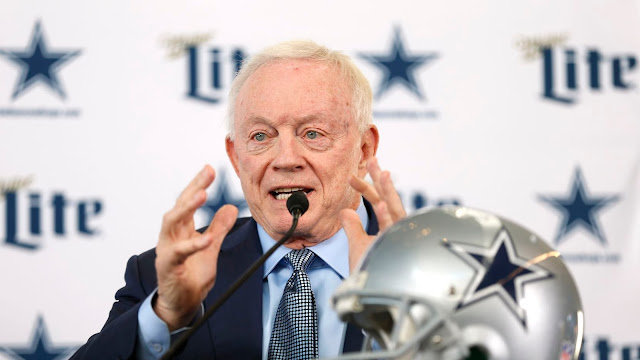 Today, the Dallas Cowboys are the Dallas Cowboys in name only. There's absolutely nothing left, in terms of culture and identity, of the Cowboys of old. I was a lifelong Dallas Cowboys fan, but I loved the Dallas Cowboys for their unique identity; that they created a culture around the likes of Tom Landry, Roger Staubach, Bob Lilly and Tex Schramm; that they once stood proud of this country and proud to be "America's Team". At this point, they might as well be called the Dallas Football Team. Soon enough, when the woke mob finally gets its way, that'll probably be the result anyway.

The same can be said about the 2014 Cowboys, who suffered at the hands of the controversial "catch" by Dez Braynt near the end of regulation at Lambeau Field. In recent years, the NFL confessed that the referees made the wrong call, and that Dez Bryant indeed caught the football. It's possible that, had the referees made the correct call, the Cowboys would have gone on to score and win the game against Green Bay. Instead, they fell to the Packers 21-26.

The 2016 season witnessed yet another controversy, but this time in the quarterback room. All Pro quarterback Tony Romo was slated as the team's starter but suffered a serious back injury in a preseason game against the Seattle Seahawks. Rookie Dak Prescott subsequently inherited one of the best offenses in the NFL, and the best surrounding cast ever inherited by a rookie quarterback in NFL history. The Cowboys finished the regular season with a 13-3 record, only to lose in the divisional round of the playoffs, once again to the Green Bay Packers.

In hindsight, the 2016 Cowboys committed to the hot hand in rookie Dak Prescott, when they ought to have reinserted the proven veteran and All Pro Tony Romo at the quarterback position. Romo was a far more seasoned and proven passer, whereas Prescott lagged behind Romo in virtually every facet of his game. Prescott was demonstrably a poor passer during the 2016 campaign, whose success was largely attributable to rudimentary play calls to accommodate his inability and inexperience. Regrettably, this decision was partly responsible for the end of two great careers: those of Tony Romo and Dez Bryant. Throughout the 2016 season, Prescott's inabilities as a passer virtually neutralized Dez Bryant as an offensive weapon. Bryant thrived with his physicality in contested catch situations.

Throughout the 2016 season, Prescott was unable to accurately place balls on target, and so Bryant suffered greatly as a result. A legitimate argument can be waged, as I do here, that Dez Bryant's departure from the Dallas Cowboys, and subsequently from the NFL, was attributable to the decision to start Dak Prescott over Tony Romo. While we will never know, it is quite possible that, with Tony Romo back at the helm down the stretch, the Dallas Cowboys would have been a viable contender for Super Bowl LI.

While it is true that certain factors beyond their control have plagued the Dallas Cowboys since their last Super Bowl appearance twenty-six years ago, it's also true that the organization has enjoyed some limited success and, otherwise, made poor decisions which have condemned them to failure. The most important intangible within any organization, whether a business, a team or whatever, is leadership. Leadership sets the tone and fosters the culture of the team, and it is a combination of talent and culture (and a little bit of luck along the way) that wins championships. On each of the rare occasions that the Dallas Cowboys have enjoyed sound leadership from their head coaches, namely Tom Landry, Jimmy Johnson and Bill Parcells, the team owner Jerry Jones has chased them away.

Since acquiring the Dallas Cowboys in 1989, Jerry Jones has longed to be more than just an owner; he's wanted to be the owner, the president, the general manager, and the head coach. He craves control throughout the entire organization, and he's refused to cede any of that control to anyone, even if that means sacrificing a promising Super Bowl run. Unsurprisingly, when Jones was inducted into the Pro Football Hall of Fame, he even confessed that he wouldn't give up that honor for anything, even if that meant another Super Bowl win. That should tell you everything you need to know about the guy. He doesn't care about the team; he cares only about himself.

The annals of history demonstrate that good coaches will not tolerate these impositions; good coaches need to have control over team and personnel decisions, as they are responsible for using those tools to get the job done. The same is true for any technical professional: when the mechanic works on your vehicle, you stay out of the way and you let the man work, and you let him decide on the tools.

An athletic organization is even more complicated, for the fact that people are the coach's tools, but in this case the tools are like gears that cooperate and interact with each other; with that in mind, they must be selected carefully, and they must be compatible with the others. The combination of these individuals and their personalities, whether conflicting or complementary, will decide the culture and, with it, the fate of the season.

Championship teams succeed because of culture, and successful culture is the consequence of sound leadership. No organization can flourish in a competitive environment without either, and the second is indispensable to the first. So long as Jerry Jones is the owner of the Dallas Cowboys, they will continue their newfound tradition of disappointment and mediocrity. It's about time their fans walk away or otherwise get used to it.