August 17, 2014
Josh Barro, opinion journalist and editor for Business Insider, is one of many academics who have become infatuated with the neoclassical traditions of Keynesian economic theory, or its largely-confounded offshoots which purport to offer vastly different conclusions while somehow remaining rooted in the greatly misunderstood nature of money, or its commonly accepted impostor known as fiat currency. 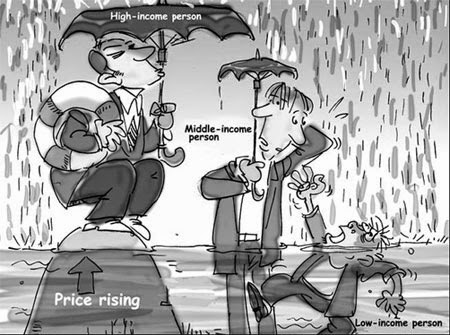 In a recent interview with Peter Schiff, author, CEO, and chief global strategist of Euro Pacific Capital, Barro defended the notion that oil prices are largely immune to fluctuations in the monetary base, and that it is rather geo-political dynamics which are responsible for the increase in crude oil prices. Barro even claims that, absent measures of quantitative easing, fuel prices would remain largely unchanged. This view is simply one which fails to recognize the false sense of wealth -- often called the wealth effect -- engineered by the immense scale of bond-buying and purchases of mortgage-backed securities performed monthly by the Federal Reserve. Absent this artificial sense of wealth, and in an environment of nominal credit contraction, oil prices would naturally correct downward to a level of equilibrium at which a lesser supply of cash chases a set supply of fuel. This is the natural propensity of supply and demand.
In this interview, Barro also claims that fuel prices are accelerating at a rate unmatched by any other commodity. This is surely false, as the prices of precious metals and agricultural goods, such as beef, coffee, corn, and sugar, and others, including rubber, have illustratively sustained an equivalent degree of increased prices. Barro's tacit support of the fiat monetary system is easily dismissible as foolish not only by purchasing power comparisons to real and traditional stores of value, but by the demonstrable correlation between the monetary base and the cost of oil as denominated in that currency. In their 1998 Quarterly Review, the Federal Reserve Bank of Minneapolis investigated the correlation between monetary expansion and prices, concluding the following:

"Under fiat standards, we find the same extremely high correlation between money growth and inflation that has been found by other researchers who have studied this relationship. In addition, we find that the strength of the relationship does not vary with the measure of money used: The correlation between money growth—measured by primary money, secondary money, or M2—and inflation is always 0.99."

Barro is conspicuously committed to measuring "recovery" and economic "well-being" by the increase in asset prices and aggregate consumption, all of which are priced in dollars. These figures are nothing short of a representation of an increased overall cost of living and a reduced standard of living. When one's economic measuring stick ignores the value of time not working -- as well as retained value and protracted returns consistent with expectations, and the efficacious value of goods and services -- to instead utilize dollar-based benchmarks and values based on spending and the velocity of money, this is the academic conclusion which is to be inaccurately drawn. Moreover, when Barro claims that there is no ironclad link between monetary base and prices, he is empirically proven false by a 1995 report by the Federal Reserve Bank of Minneapolis, which found a 90 percent correlation between money printing -- inflation -- and general price increases. In 1998, their Quarterly Review also revealed the following:

Inflation is evincibly the expansion of the monetary base. Prices can, of course, rise and fall because of myriad exogenous forces. The supply of money is merely the most ubiquitous force driving general prices. In the end, inflation is first and everywhere a monetary phenomenon.