From Gold Standard to Petrodollar: The Rise and Fall of the American Empire

June 28, 2015
Since Roosevelt's administration installed the designs of the New Deal era in the United States, the role of government in the lives of the American people has transformed.

Over the course of World War II and the ensuing intra-Cold War conflicts, the War on Poverty, the War on Drugs, the space race, and the arms race, the United States accrued a tremendous pool of liabilities in order to fund these extravagant projects.

The United States dollar was then denominated in units of gold, redeemable at the request of the bearer of those reserves on the international scene.

By this time, President Franklin Roosevelt had already issued Executive Order 6102 outlawing personal ownership of gold as money or hoarding thereof, but the United States dollar still operated from this system on the international scale.

By 1971, the United States had long abused its privilege by expanding its money supply, or issuing debt it could never repay, in order to satisfy the whims of over-promising administrations.

At the time, President Nixon elected to temporarily close the gold window, all in response to the requests for redemption of gold by its international creditors.

This was, contrary to popular belief, a moment in American history when the United States government effectively defaulted on its debts and admitted its insolvency.

Subsequently, OPEC espoused this system and the United States government was thus permitted further extravagance with its inflationary monetary policy, over which period of time the United States dollar experienced an expansion of supply on the magnitude of greater than twenty-fold, while the dollar price of gold has soared nearly 5700%. 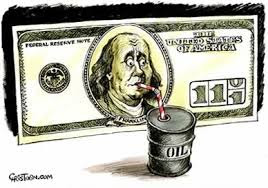 This imperils the stability of the United States dollar, which is, of course, the lifeblood of the American markets.

Without this stronghold upon the petrodollar system, the United States dollar will surrender its global reserve status and will vacate its position in the international market as a mere facilitator of trade and exporter of inflation.

This is the basis of the war efforts in the Middle East today and the impetus for the largely acceptable propaganda Americans regularly observe and accept.