The Bubble in Higher Education: Why Paying Educators More Is Not the Solution


A common fallacy in the debate on education spending is that confusion between paying teachers and funding education. The payment of individuals who identify as teachers is not a direct correlate to, much less a cause of, educational advancement.

Perhaps the greatest discontinuity across modern intellectualism is that among professional educators who advocate simultaneously for more affordable, accessible education and higher salaries for those who deliver it. Of course, the law of supply and demand demonstrates the effects of higher prices in relation to quantity demanded, and this is surely consistent with the market behaviors of these educators in their own respective commercial endeavors. Yet this will clearly never stifle the frothy, emotional ambitions of those whose imaginations possess the capacity to envision something greater, more civil, or even more utopian. After all, each of the world's calamities is merely one college graduate away from impending nirvana.

In the end, the curious task of economics is to demonstrate to men how little they really know about what they imagine they can design. For this very reason, the economist is often dismissed from the intellectual table as heartless or inhumane. The economist, however, is the person who has successfully suspended his role as the active participant to instead favor that of the active surveyor of human action. To more clearly understand the causes of the modern mortgage-style debt crisis confronting college graduates, and to therefore comprehend the mechanisms buttressing artificially high costs for higher education, one must examine the means by which the debt, now collectively over $1.1 trillion, was enabled.

Oddly enough, the bubble in higher education fails to differ much from the causes of the bubbles in information technology, the NASDAQ, the real estate market, the United States bond market, and even the 17th century tulip mania. Each of these market responses spawned from the distortion, per-capita reduction, and collectivization of risk by exogenous institutions, whether congressional or parliamentary. The modern cases of the dot-com bubble, the housing boom and bust, the United States bond bubble, and the bubble in higher education have been the consequence of loan guarantees crossed with artificially-low rates of interest, or teaser rates, which originally enticed otherwise nonviable consumers to invest in product which they could ill-afford upon reset rates. In the specific case of college graduates, the federal government, chiefly through the Department of Education, has advanced moral hazard at these artificially low rates of interest by escalating its total volume of consumer loans. Unscrupulous purchases by Fannie Mae, Freddie Mac, Ginnie Mae, Sallie Mae, and the Department of Education, along with purchases by the Federal Reserve and its zero-interest rate policy, have encouraged and continue to encourage consumer debt to chase goods whose principal costs, not to mention the interest and capitalization of this debt, will be surely met with a general population empirically ill-equipped to bear the cost. 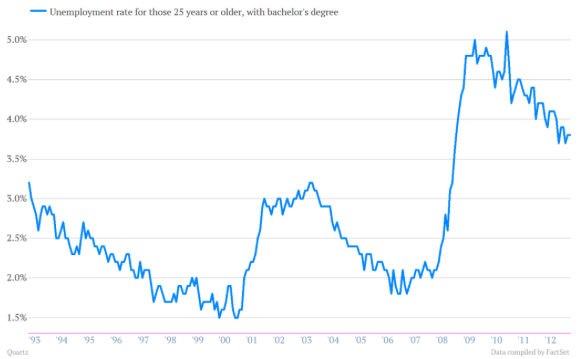 The introduction of this moral hazard only pairs higher education, a scarce resource, with an exorbitant level of demand whose efficacy as a tool for higher returns, presumably the object of the investment in higher education, at least at the individual level, has gone unrealized for a majority of recent graduates, whose opportunity costs in alternative investments, apprenticeships, internships, and other avenues for professional, financial development might have yielded more desirable, substantial outcomes. A wager on the S&P 500, for example, could have secured a 189% nominal return, while a certificate of deposit could have yielded no less than a 105% nominal return of funds. 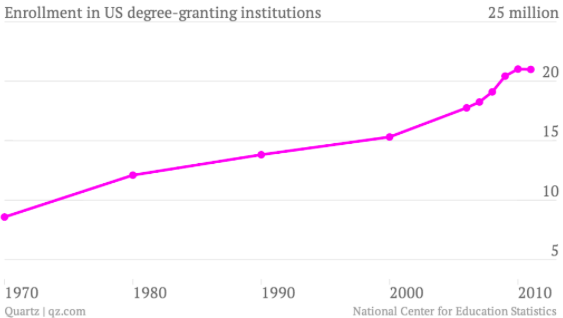 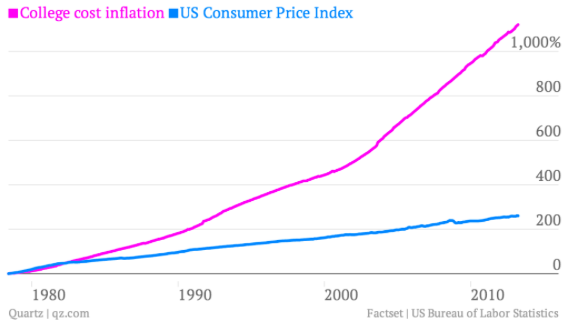 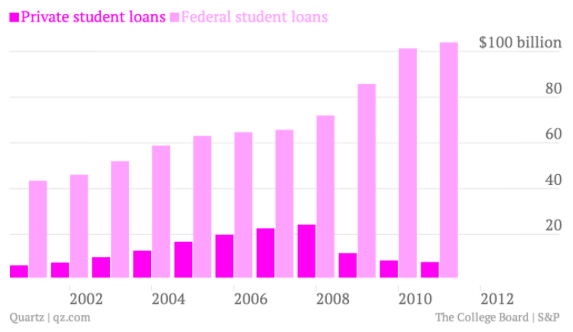 The data illustrate that the modern college graduate has pursued college education out of expedience, delusions of grandeur, and convention. The average student will graduate with a skill set consistent with that of a liberal arts degree met with a starting salary barely equivalent to his outstanding student loan debt. College education today is plainly far more expensive and over-utilized than it would be absent the moral hazard of artificially-low interest rates, guaranteed loans and grants.

Let us conceptualize the costs of education through historical comparison: In 1914, Henry Ford began to pay his factory workers five dollars per day. At that rate, a factory worker could cover his son's annual tuition expenses at Yale through only thirty-two days of work. Today's factory workers at Ford earn approximately $250 per day, which equates to 162 days of work for one year of tuition at Yale. Today's autoworkers, however, must also pay payroll and income taxes which did not exist in 1914. A reduction of gross income by a conservative 25% returns an annual take-home amount nearly equivalent to an entire year of tuition at Yale. Might one reasonably expect the costs of education to decline over time, considering the remarkable advances in technology, telecommunication, and mass production of and accessibility to these resources? Consider Wikipedia, TED Talks, Open Education Database, Google, and the abundance of podcasts, tutorials, and audiobooks which are readily available online. 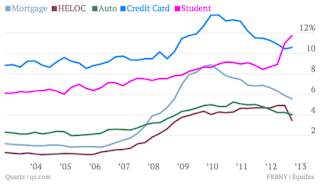 It is, after all, the distorted and artificial mechanism of government which has encouraged demand to widely and indiscreetly chase the scarce resource of higher education. Without the artificial supports of guaranteed loans, grants, and low interest rates, colleges and universities would need to slash their prices, tighten their budgets, and reduce their extravagance to adjust for diminished effective demand. In keeping with the general trends in university construction and real estate development across the United States, Americans have lived beyond their means for far too long. They have been enabled by a grotesque measure of debt, by now greater than the nation's annual gross domestic product, which invariably draws from the capacity of future consumption. A correction in the United States bond market, equities markets, the United States dollar, American commercial and residential real estate, its underlying service industry, and the market for higher education, will reveal the consequences of these actions.

Those who advocate for higher salaries for educators while simultaneously supporting greater accessibility to and affordability of higher education simply fail to recognize the contradiction of these terms and the net effects of systemic financial redistribution to a field whose producers, keeping all else constant, will find little benefit beyond nominal profits, who will thereby gain no immediate or even incidental supplemental skills to benefit their students, who will eventually be replaced by a more skilled, potentially enervated professional whose previous industry could no longer compete to sufficiently appeal to the laborer, and whose purchasing power per dollar would only diminish due to its redistribution from capital investment, research and development to a means of greater consumption. Each of the platitudes which directs this form of blissful advocacy cloaks the underpinnings of commercial development: higher education is the means, not the ends in and of itself, to a higher standard of productivity and living. It is still, however, the production of goods and the efficacious mechanisms thereof which enable a lower cost of living and its concomitant higher standard of living. Throwing more money at a perceived problem will not alone solve it. In fact, there are no solutions, only tradeoffs. In the end, this seems to only make that problem more expensive.