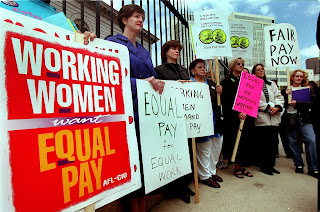 A recent article released by the Bill & Melinda Gates Foundation covers the mythical gender wage gap in a way which supposes that the gap is the consequence of gender discrimination. This is a myth. If you believe that gap to be the outcome of gender-specific discrimination, you are surely confused. If this indeed were the case, that women were being unfairly discredited or outright ostracized or exploited in this manner, one must then follow this thread to its end to conclude that employers on the whole, whether men or women, are actively foregoing the substitution of the male staff, at a considerable discount, to favor their expensive tastes in gender.

That perceived inequality, a 21-percent gap which has time and again been explained away as a mere comparison between aggregates, exists merely as the headline source from which politicians have aimed to launch their campaigns for so-called social justice, despite Congress having always been comprised of a supermajority of males, today at 80%. These disparities exist for life expectancy, hours worked, miles driven, head of household, here often statistically favoring women if interpreted only at face value.

The world tends everywhere toward some semblance of equilibrium. Men and women, though on average valued nominally differently in terms of executive commercial function, operate within the realm of trade-offs. This often takes the form of male earnings to enable female expenses or to cater to the cultural-, relational-inertial forces of gender-specific responsibility and those executive qualities which are, primitively speaking, characteristic of a qualified mate.

Psychologist Adrian Furnham contends, “Boys negotiate pocket money and allowances with the father, though girls may be encouraged to charm their fathers into opening their wallets. Hence some girls come to believe that financial wheeling and dealing is a masculine activity and shun all money matters for fear that it renders them somehow less feminine.” The author continues, “Various considered the differing attitudes that males and females have toward money and concluded that females regarded money as being of less importance than did males.”

There is no serious surveyor who will denigrate either sex by suggesting that one benefits more handsomely from privilege than the other. The wisdom of this assessment is altogether rooted in the notion that equilibrium, a satisfaction of terms among persons, is being achieved. The voluntary continuation of such relationships is an admission of faith in a future, or a present, which bears fruits which will be, or have proved to be, mutually satisfactory.

A comparison between persons at the mere level of salary dilutes the human experience down to headline values which fail to capture or represent the myriad additional ways individuals capitalize on their time and how they prefer to spend it. Even in the executive world, there are surely men and women who haven’t yet realized the full extent of their earnings potential. Perhaps those executives are negotiating with themselves, with expectations which might then spawn from higher wages to offset the statistically-unseen advantages of flexibility, or even with the anxiety associated with relational negotiations altogether.

As it turns out, men and women on the whole emphasize different values and assume specific roles which fail to necessarily translate to positions of monetary-denominated parity. However, controlling for marital history, pregnancy, hours worked, education, geography, continuous time in the labor force, and select career fields, the notorious gender wage gap begins to vanish and even marginally favor women in some cases. This is further evidenced by stock market participation, whereby risk attitudes, education, and financial literacy prove valid predictors that are also statistically associated with gender.

Ultimately any residual gap may be explained away by individual differences in preferences or negotiation. The sea of variables is vast, and aggregate comparisons are analogous to drawing conclusions about habitability in the Pacific from a United Airlines Boeing 757 before landing in Honolulu.