A Deeper Look: What's Under the Tent?

June 10, 2016
The common refrain of cost savings spawning from the Housing First model focuses exclusively upon the savings posted by the participants, holistically ignoring the more convoluted systemic costs, both conspicuous and inconspicuous, and its effects across time, both immediate and long-term. 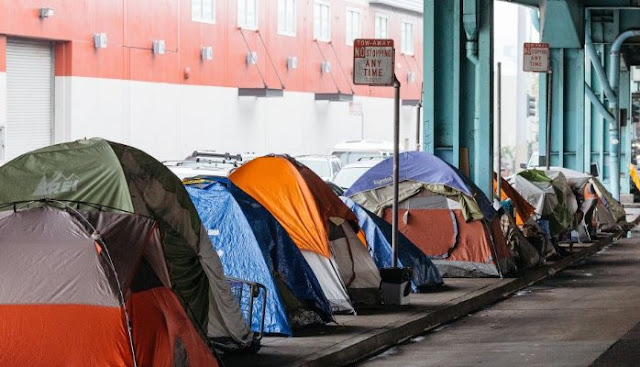 These costs stem from tacitly encouraging non-work or static employment at the expense of work and professional advancement, fueling the viability of homeless and jobless living, and empowering those numerous forces which effectively validate, and provide upward pressure to, the popularly-vilified price floors of the housing market which then prevent market-clearing at lower prices and achieve nothing in terms of driving actual supply or advancing the interests of the real originators of these tax revenues, the lot of which ironically live in shared housing with family, friends or roommates, or across the Bay Area, while their homeless counterparts enjoy subsidized independent living in close proximity to their preferred services or places of work.

In addition to the softer, less-celebrated costs of this initiative and its distortion of expressed marginal preferences, all of this does very little to mitigate losses in terms of state and national debt, which draws from future consumption and leisure, while those aggregate costs of emergency and hospital services offered to participants and non-participants alike continue to balloon. These are the costs of intellectualism which tend to elude the untrained eye. The Housing First model is grounded to the presupposition that homelessness may be outright eliminated from the human experience.

Fortunately, individuals are, as of today, free to exist with or without housing. In order to suppose that everyone should have a home is to unwittingly condemn those who have expressed preference for something else, perhaps an alternative version of home, and to completely ignore the most organic definition of home: any location to which an individual reliably defaults or returns.

Ultimately, this supposition implicitly contends that some individuals are entitled to someone else's toil or sacrifice, thereby setting a nearly-universal, Boolean-style precedent which systematically qualifies some for conscription for the remote interests of others.

Oddly enough, this reduces the individual to programmatic value, hardly ever consistent with the headline objectives of the party in power or their many supporters.

It is important to note that each of these outcomes is derived from a narrow data set comprised of select individuals within a snapshot in time. I will hardly dispute the efficacy of Housing First relative to Medicaid or any of its counterparts which subsidize hospital costs for low-income persons. However, this is an incomplete comparison.

In tandem they hardly bear even a modest semblance to a solution to a perceived failure which has long been the consequence of the Leviathan of regulations, price controls, liabilities and moral hazards produced by government then later leveraged and misrepresented by its controllers for political expedience.

A recent article contends that Section 8, the flagship program managed by the Department of Housing and Urban Development, "helps some of these low-income households pay their rent by providing vouchers through the Housing Choice Voucher Program."

Oddly enough, government originally created the problem through its stranglehold on building permits, zoning laws and regulatory constraints, then it conveniently claims that it has come to the rescue with a program which inherently restricts access to those of privilege by a so-called lottery system which displaces others, namely non-participants whose incomes are just beyond the threshold for qualification, to dilute the significance of their work by comparatively neutralizing their incomes: those of the middle class whose life stories are more generic and fail to tug on the heartstrings of the occasionally politically-, intellectually-motivated public, whose even less occasional vote at the polls unwittingly bears profound consequences beyond their specialized understandings.

One of the major pitfalls of this program is its unspecified focus on housing individual participants or mere couples in units whose capacities might otherwise be fulfilled by more sizable groups or families, measured quantitatively by the size of the group or family unit or qualitatively by the extent of their appetite for success.

This is the vast opportunity cost of the unknown, the overlooked, and the externalities and unintended consequences of built-in moral hazards caused by a systematic approach that fails to comprehensively diagnose the problem to therefore administer a poisonous antidote which actively dictates human behavior and distorts the individual's kaleidoscopic models of marginal preference and perceived cost-benefit analysis, yielding far greater harm than specific, traceable benefit.

In the end, there are no solutions, only trade-offs. Those who disagree surely have something to sell and invariably something to gain.

The End of Poverty?

Poverty is relative, neither reconcilable nor extinguishable. The military industrial complex, being organically antithetical to the strict enhancement of the factors of production which advance its beneficiaries' standards of living, combine with an enabling welfare state to innately yet discreetly cause these perceived effects.

A more sophisticated investigation into these cases, on a more intimate basis, will reveal an array of causes which may relate more to the survivability of otherwise-extinct characteristics which are prominent among those whose lifestyles appear more primitive to modern civilization. These are potentially a set of psychological, biological or group artifacts which have survived through generations with which their faculties have become increasingly incompatible to enable protracted independent, self-sufficient living.

The modern welfare state absolutely resists the progression and validation of life forms which are suitable for independent survival in this world, while promoting and enabling the procreation of such offspring, thereby facilitating the perpetuation of a regressive cycle of growing dependency, entitlement, and individuals who simply lack impetus to assume responsibility for their own respective lives and the risks thereof.

The outright eradication of poverty or homelessness, both of which are incompletely defined, can never be attained, especially when the perceived advantage in non-work supplants the incentive for production and learning, the latter of which risk time and comfort for an unknown frontier of seemingly improbable outcomes which are irreconcilable with the immediate gain which is often too appealing or reliable to forego.

The tax structure exists to force productive, motivated persons to subsidize lifeless individuals, whose existence offers little benefit to anyone else, to merely advance city cosmetics, across sidewalks, bridges, park benches and underpasses, all at an extreme dollar amount.

When housing so-called homeless persons, for example, these units then, having disappeared from the market, depress the potential for voluntary advancement, which benefits resourceful and market-sensitive individuals, in favor of policies enforced by the full gravity of law, to the benefit of persons who have long demonstrated no clear desire to accommodate anything but their own myopic interests, however vile or seemingly destructive of their own ends, all corroborated and richly rewarded by active case management and outreach teams whose core objectives are on timelines of immediacy, only catering to quotas and hardly to qualitative improvements of the lives of these individuals, indeed removing them from public eye but seldom anything else.

This political machine mobilizes a whole host of agents and appropriates a deep pool of capital to combat this phenomenon, all of which goes unchecked yet undeterred despite a lack of substantive results to warrant this initiative.

In the end, long-term dependency programs foster exactly what they are intended to produce: dependency upon a system whose budgets are determined from quotas and measured participation.
This is evincibly true in the San Francisco Bay Area, where so-called homeless persons benefit to the equivalency tune of greater than $70,000 per year, effectively subtly pricing out middle-income households at the grocery store through their artificial price-pushing Cal Fresh EBTs, rent-stimulating housing choice vouchers valued per-capita in the thousands of dollars per month, whereby many are paying nothing or virtually nothing on their housing, the low-hanging Social Security Disability Income benefits for which outreach teams will easily negotiate on behalf of such individuals, despite the participants' capacity to work or even their existing occupation in the informal or black market, and the innumerable taxpayer-financed non-profit organizations extending gratuitous sums of funds for payment on delinquencies, property damages or unpaid bills caused by careless behavior and reckless budgeting practices.
The total of these programs accomplishes nothing but the redistribution of purchasing power to bid up the prices of land, labor and capital by unwittingly depressing labor participation by increasing the perceived marginal cost of labor, something partially captured in the teen unemployment rate and overall labor participation rate, and thereby crowding out otherwise viable and healthy investment while doing nothing to stimulate substantive production, while instead temporally driving spending, in the advanced exchange loop.

Ultimately, the reader here bears witness to the ongoing feud between the expressed person and the acting person, the swindled and unwitting and the grotesque effects of aggrandizing the spread which claims residence therein. This is, after all, the namesake of this blog: Paradocracy.