The brilliance of the current political structure is found in its constructive conning of lower-income individuals into paying for the salaries and benefits of persons who claim to possess the acumen and authoritative leverage to administer such positive change as to avail them overnight of their lot in life, all while perniciously extinguishing those opportunities by systematically monopolizing the funds which might otherwise be available to incentivize their creation. This is all part of the soft despotism which has palatably replaced the more blatant and physical form of slavery which is indelibly etched into the minds and texts of nearly every student of history. Let it be known that this form of slavery, more conspicuous and systematic, will surely become the next subject of great scrutiny in the annals of future texts covering this history.

The counter-cycle theory of exchange proposes that the systemic means by which purchasing power, here defined as the relative average value at which goods and services are exchanged with money, is either overtly transferred through taxation, forfeitures, or subsidization, or covertly dispersed through inflation or its counterparts of quantitative easing and artificially-low rates of interest, consequently causes antithetical resistance to and disproportionate, transformative advantages within already-imbedded market expectations and schemes of incentivization.

In the case of government interference in the market, whereby measurably-ambiguous, dubious depths of social “good” are channeled by heartwarming campaigns in the zero-to-negative-sum social forum, private investment is then crowded out to pave the way for phases of consumption-focused public policy, the totality of which obstructs the progressive cycle of profits chasing and incentivizing market advantages, which have historically materialized through auditable, market-sensitive modes of production to satisfy effective demand which spawns from the credit, ultimately from savings, generated by consistently-productive counterparts within the cycle: the consistency of this production generates a standard for purchasing power from which basis all transactions may be predictably priced, and through which dimension of expectations transactions may be predictably encouraged. Government work, subsidies, and cash transfers disrupt this inter-cyclical advancement of personally-defined wants, effectively unilaterally redefining the objectives not only of the marketplace but of human existence.

The eventual tide of incentives will overwhelmingly justify the distribution of both physical and human capital to unsustainable, regressive ends, matching the former with an ever-unproductive, relatively unmotivated — toward the pursuit of value-added commerce, that is — latter. These phenomena are reproduced and reinforced over time to further institutionalize these regressive expectations of counterparty responsibility. 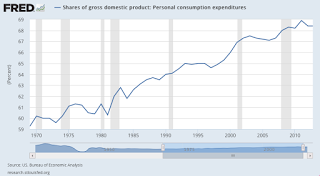 The systemic redistribution of purchasing power to unimaginative ends of consumption, or to inherently (based upon the calculated, replicated reluctance of individual persons to pay for or to be incentivized by these abstracts, i.e. by homeless people they do not know) unwanted ends in and of themselves, will across time deplete the market of real savings, leading to the incidental decline in the real value of money, effectively completing the counter-cycle phenomenon of exchange. This counter-cyclical intervention, which resists the inherent propensity of market appreciation, requires time to purge misallocations of invested efforts, skills, and resources, and the foregone cycle of advancement leaves only to the imagination an unknown quality of progress, a unique quantity of time in space the world will never again possess, and the palpable consequences of negative payout attending the pursuit of the unscientific, unpredictable ends of an abstract political agenda.