August 31, 2017
According to an article published today by The Hill, the Trump administration has declared its intentions to dramatically slash ObamaCare outreach funding from $100 million last year to $10 million this year.

Unfortunately, this budget cut is simply not dramatic enough. Simply put, outreach funding is a complete and utter contradiction, as the spirit of any government program is to cater to a specific set of initiative-taking individuals or households who actively take an interest in improving their independent lives, not to attract leeches who merely wish to swindle the taxpayers into affording them an indefinite period of enhanced leisure. 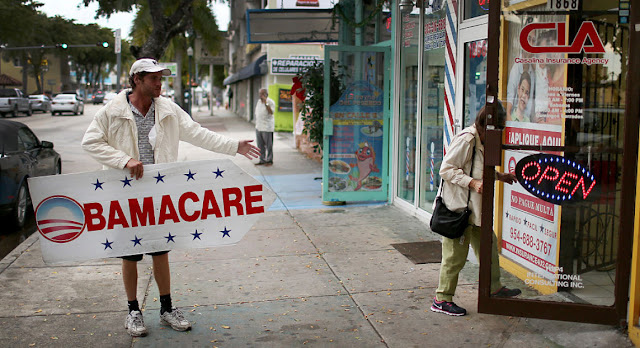 In the so-called homelessness initiative, federal and local tax dollars are spent on the same types of projects, whereby outreach staff are subsidized to meet with members of the community who appear homeless to pitch the prolific menu of programs that you, as taxpayers, subsidize through your income and sales taxes.

This may indeed prove to be the most nefarious and insidious of all effects of the dependency system, whereby benefactors are systematically fleeced to afford beneficiaries a padded life of systematic offerings that require little to no psychological participation, effectively rendering superfluous each of those mental faculties which would otherwise serve the individual in the independent world.
In addition to acquiring disability benefits for physically-capable social dependents, outreach personnel keep themselves busy by connecting them with housing vouchers to cover the majority or entirety of their rents.

They will pitch the splendor of the dependency system in the same way you might motivate your children to do their laundry.

The primary difference here, however, is that the social dependent is being motivated to take your money (to satisfy the quotas of those subsidized agencies) while doing absolutely nothing to pursue the apparently-overrated life of self-sufficiency and independence.

In fact, this appears to precisely satisfy the harbored preferences of the outreach staff, social workers and subsidized agencies, as this only further validates their professions and keeps their agents employable in the cushy non-profit world of more immeasurable values.

What's worse, the beneficiary is effectively emboldened to become more cynical of his potential, as his conviction about his believed disabilities will continue to be met with benefits that he could achieve in the independent world only through the laborious and expensive chore of maintaining employment.

And for the social dependent, the greatest marginal rate of taxation that he will ever face is that first dollar that he earns which renders him ineligible for the benefits he once enjoyed by sleeping in, playing video games, smoking and drinking throughout the day, and meandering around his daily life with no boss and hardly a worry in the world.

So as you ponder the social solution, remember to consider the specific and long-run ramifications of projecting onto everyone an assumed responsibility for the demands of others and the unmeasured psychological consequences to the beneficiary who yields to this advantage instead of developing an aptitude for the ultimate yet forgotten objective: self-sufficiency and independence.