Down the Rabbit Hole of Gender Pronouns

September 08, 2018
Another subject has entered the social scene in a more meaningful capacity than ever imagined for the most basic of questions about personal identity.

The subject has entered casual conversation, the workplace and even schools, where teachers and professors have been encouraged or even required to gently inquire into the gender identities of their students, so as to avoid mistakenly referring to them by the traditional pronouns which have gotten the job done for so many centuries. 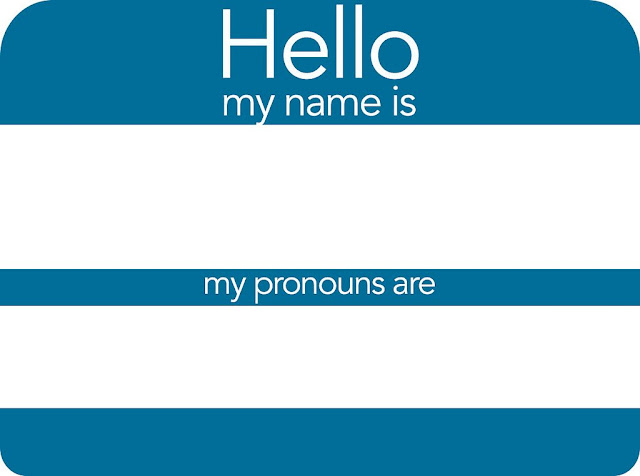 Well, according to the fresh crop of Cal-Berkeley enrollees, there’s apparently nothing the average person can say or do that won’t offend a member of the protected class.

And gender is apparently another form of unrestrained abuse running rampant in our community, where some individuals have expressed that these two words, man and woman, fail to adequately represent them.

It is only the assumed and subjective roles that have accompanied these basic identifiers, masculinity versus femininity, which have caused so much controversy among the incorrigible crowd of aimless adults, who are themselves flush with enough college time — otherwise known as the six-year all-inclusive resort for unemployable busybodies — to keep them lying in wait for next weekend’s protest against everything that’s keeping them down, whatever that ends up being.

In this particular case, the topic of gender subjectivity, or gender ambiguity, is wholly dismissed by one unanswerable question: how would my infant know to identify as a zeep, or any other gender for that matter?

Should the respondent succumb to the temptation to actually define the profile of a zeep, or any other pronoun, that respondent will have effectively established the rules, parameters, conditions and, incidentally, the original stereotypes for that identifier. Ironically, as they attempt to substantiate their claims against traditional gender definitions, their own arguments inevitably undermine the integrity of their very own movement, which ostensibly aims to steer the public away from such ruthless and inflexible standards.

In due time, that same respondent will be faced with a deluge of new progressives who wish to question the completeness of the former camp’s definitions; who wish to augment the evolving list with a number of their own unique creations, still uniquely committing only the same error in deviating from the conventional definitions to a more subjective and unscientific set of alternatives. Of course, these alternatives serve not to improve anyone's understanding, but primarily to confuse the conversation around the topic of gender. After all, the original conventions had but modest implications for gender: they formerly sought to represent the person's chromosome profile and, by extension, the individual's reproductive capacity. In the wake of contemporary political rumblings, however, protestors and political activists strive to accomplish much more. Ironically, they fail to acknowledge the fact that gender was never intended to comprehensively define a person, but that is precisely the initiative of the activists who either can't appreciate the poetic contradiction or otherwise have bigger plans in mind.

As it turns out, the gender test was never really a marker for one’s identity, one’s personality or the greater nuances which distinguish every individual: in fact, identifiers all over fail miserably to capture these qualities, and any attempt to achieve this end through new words and concepts serves incidentally to prioritize diversity in form over diversity in truth. After all, there are just as many unique identities on a planet swiftly approaching 8 billion in number.

Ultimately, what does it mean to identify as a male or a female, or to be feminine or masculine?

Are these traits best encapsulated by John Wayne, a Marlboro ad, Hollywood's hottest couple or the latest Miss America pageant?

These may indeed prove to inspire some of the assumptions about genders, but they still serve only to distract the individual from the fact that our archetypes really amount to nothing more than the definitions and expectations we accept, endorse and apply to ourselves.

As such, it needn’t matter, really, how the chromosomes read, but instead how we manage their real implications and how we view ourselves independently.

Everything else is noise, concerns about the opinions of others, matters we can’t always control and which plainly have no bearing on the classic denotative structures whose only purpose has been to lay a basic foundation for the most basic of human functions.

Unfortunately, the institutions which flex to these political whims, whose professors follow orders by asking their students how they identify, serve regrettably to lend credibility to a condition empirically associated with psychosis, depression and confusion; a condition which is marked by a suicide rate roughly ten times that of the general public.

On the surface, there appears to be nothing wrong with requesting that others respect the expressed preferences of those who identify as some other gender beyond male or female, otherwise known as non-binary; but the oft-ignored side of this discussion centers around the mandate that others must adjust both their perceptions and their lexicons to accommodate a fad, a grammatically-incorrect and plainly unscientific term, while the unseen side of this discussion centers around the perpetuation of an unfounded myth which appears only to bear associations with negative psychological outcomes or, otherwise, a set or persons who will eventually change their minds. As it turns out, this latter group reportedly constitutes greater than 80 percent of the entire transgender community: an inconvenient truth, to be sure.

It is invariably the duty of leaders and mentors to recognize the impressionability and fragility of the youth, their desperate and often-unarticulated quest for direction, and our important position in guiding them to academic and personal success.

This occasionally means taking a hard line, even when faced with political incorrectness, especially when we have the evidence to illustrate the risks of indulging their destructive delusions.