Where the Abortion Debate Goes Awry

July 15, 2020
Upon carefully considering the issue of abortion, I've begun to wonder whether the "pro-choice" camp would endorse the freedom to terminate the life of an infant. In considering this issue, it becomes apparent to me that only a nuanced distinction separates the born from the unborn, chiefly the former's visible existence in our world. The unborn, on the other hand, often reside out of sight and out of mind, leaving the physical bonds between mother and child to produce a sense of power and confuse our sense of right and wrong.

After all, it’s not that these bonds are severed after birth; on the contrary, they merely change their form. Indeed, during the child's infancy and even throughout his childhood, the offspring remains strongly attached to his parents, albeit not as physically as he once did through his umbilical cord. Nevertheless, the born and the unborn share mutually in their dependency upon the mother, who could theoretically decide at any time that she is unfit to raise a child. This dependency, then, cannot independently justify or excuse the decision to abort a child, let alone any such right to do so.

Of course, many impassioned activists and casual commenters share in the opinion that every woman should decide for herself whether to continue with the pregnancy and whether the unborn baby should live or die. Ordinarily, however, those of this camp seldom frame the subject in this fashion. Instead, they obsess exclusively over the rights of the woman, who's conveniently among the born to do her own bidding. Who, then, will do the bidding of the unborn? Are they without any rights? With this in mind, I ask:

At what stage does the mother lose her right to abortion? What is it about that particular stage that qualifies that lifeform for extra protections, whereas moments earlier that lifeform is deemed expendable? Oftentimes, in the context of this discussion, the supporters of the "freedom of choice" claim that the mother ought to reserve the right to decide the appropriate course for her body and whether she wishes to continue with her pregnancy. This notion seems to stand at odds against the rights of the baby, imploring us to contemplate whether the unborn are people or if they are to be classified as property instead; for, if the baby is indeed a person, one would find it rather difficult to explain why that baby fails to qualify for the basic human right of life. What's more, wherever rights are concerned, they certainly cannot coexist with the compromise of another's; if this were the case, they simply wouldn't be rights. So the abortion debate is not really a question about whether the state — or any government — is in the business in making decisions that affect the body of any woman, or any person for that matter; rather, it's a question about whether the contrived right of abortion trumps the baby's right to life. Likewise, this becomes a debate about whether a baby is a person or a form of property, whether a baby has rights, and when those rights are finally recognized in society. A difficult and yet fundamental philosophical consideration, to be sure.

With this in mind, it seems just as difficult to distinguish between the stage in which a baby is believed to be expendable and that in which the baby warrants the same protections of life afforded to the rest of us. As a mental exercise, let's imagine a pregnant woman who decides that she wishes to continue with childbirth. Unfortunately, this woman later discovers that she no longer wants to keep the baby, so she puts her baby up for adoption. In this particular case, one cannot help but wonder why she does not at this time also reserve the right to terminate the baby instead of going through the protracted process of adoption. When and why did she lose that right, and why did she even reserve that right in the first place? 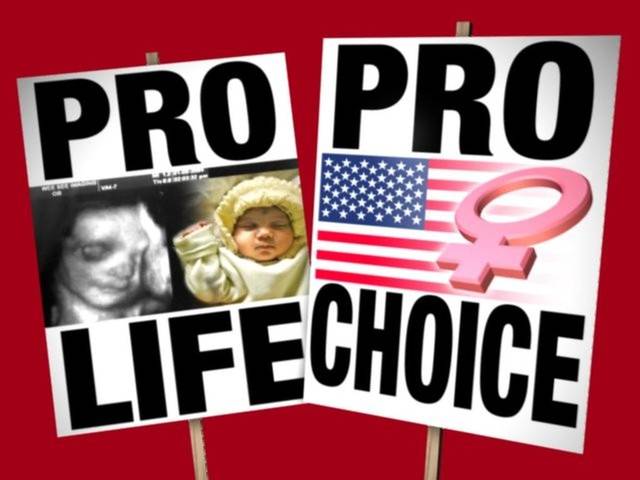 For the purposes of this conversation, let's assume that a right is any thing or course of action to which any person is entitled. With this definition, we can safely assume that one person reserves the right to reasonably defend himself against an opponent; likewise, that person reserves the right to even kill another in self-defense. However, in order to justify a position of self-defense, one must have reasonably feared that his life was endangered by the assailant; this is precisely where a given case is met with a measure of subjectivity. In this particular case, when is a position of self-defense deemed justifiable? At what moment is a given person's life truly threatened, and how do we determine whether the killing, or even the form of defense, was proportionate to the posed threat? Well, this is where attorneys and academics complicate the issue, and consequently laws abound attempting to define and then redefine that which is justified or reasonable, but most reasonable people agree — and prevailing law has long supported this — that people reserve the right to self-defense, and most of those people, albeit a marginally smaller number, believe that this right includes the right to kill in self-defense.

In this particular context, the right to self-defense, along with the right to kill under such circumstances, is auspicious not merely for ethical reasons but for pragmatic purposes. For instance, it would not be very practical to arrange a society around some notion that people cannot defend themselves against harm, that they are defenseless in the face of assault or death. The result of any such social order would inevitably be a society ruled by assailants over a shrinking population of people paralyzed with fear and a consequent inability to accomplish much of anything, for fear of losing it to the opportunist or foregoing the opportunity to exploit that society of people unprotected by that right of self-defense.

What, then, can be said about the rights of the unborn? Is it practical to promote a social order around the notion that people are expendable, that they can be killed or terminated so long as they haven't reached a given stage of development? How do we reconcile this standard with that which applies to any other form of permissible killing? Are people spared the right to life so long as they're underdeveloped? Are they spared this right in favor of some other right enjoyed by one person, the mother, at the expense of another person, the unborn child? Are rights endowed upon birth or upon conception? Are rights negotiable — in this case for the interests of the mother? If they are negotiable, are they even rights?

Ultimately, in the course of evaluating rights, we arrive at the principle of ownership: in the context of the mother, many are eager to recognize that the mother owns herself and her own body, but those same people seem reluctant to extend that principle to the unborn child. With that being said, when and why does a child transition from property to person? What, in particular, constitutes this important metamorphosis from expendable property to full-fledged human being endowed with the same inalienable rights as every other person?

While I will concede that civilization might stand to benefit incidentally, in purely practical terms, from the reduction in numbers of those born to unfit mothers, we may simultaneously and regrettably trivialize the significance of sexual intercourse in a civilization becoming increasingly numb to its attending risks and responsibilities, not least of which is the psychological wellbeing of the parents, chiefly the mother, left to regret that irreversible loss in later years. Herein we find an inarguable constant: the importance of mothers and fathers educating their children to appreciate the significance of sexual intercourse.

Regardless of whether we are to institutionalize the concept through the power of law, it will remain one worthy of instilling in our offspring for their own betterment and the collective betterment of society. After all, neither the individual nor society is made any better off for committing these mistakes; for these reasons, the abortion debate ought to center squarely on the question of how we wish to discourage those mistakes, whether generally by law, locally by the same, or informally through peers, friends and family.

In nearly every case, abortion is the consequence of some series of bad decisions inexcusable against any honest measure of responsibility. Whether we are to penalize the misbehavior formally or informally, the desirable outcome remains the same: greater measures of responsibility, fewer unplanned pregnancies, and consequently fewer abortions and fewer reductions of rights for some for the benefit of others who've been casually irresponsible with theirs. The debate around the means, whether federal, state or local laws, often serves to distract from the more agreeable ends. In determining which means are justified, we must determine how they are best administered: in this case, just as with most forms of government, the more locally the better.

Cullen Roche's Not So "Pragmatic Capitalism"

August 13, 2014
In his riveting new work Pragmatic Capitalism , Cullen Roche, founder of Orcam Financial Group, a San Diego-based financial firm, sets out to correct the mainstream schools of economic thought, focusing on  Keynesians, Monetarists, and Austrians alike. This new macroeconomic perspective claims to reveal What Every Investor Needs to Know About Money and Finance . Indeed, Roche introduces the layman to various elementary principles of economics and financial markets, revealing in early chapters the failed state of the average hedge fund and mutual fund operators -- who are better car salesmen than financial pundits, Roche writes --  who have fallen victim to the group think phenomenon, spawning the nearly perfect positive correlation to the major indexes, and thus, accounting for tax, inflation, and service adjustments, holistically wiping out any value added by their supposed market insight.  Roche also references popular studies, such as the MckInsey Global Institute's report whi
5 comments
Read more