Reparations: Slavery by Another Name

It is the mission of the Left to condition its constituency to believe that all success has been unmerited and all wealth ill-gotten, that they can remedy this problem by insisting that every last misfortune is corrected and every minority is made successful and wealthy on the basis of one’s minority status alone. This means that, assuming that people’s respective stations in life have been the consequence of privilege not merit, the Left intends to remedy the problem by insisting that their stations are merited not by their performance but by their respective ethnicities and relative misfortunes — or presumably those of ancestors whom they've never even met. Of course, this isn’t merit at all, but rather a specific type of political privilege which indiscriminately, and without due process, wrongs those who’ve committed no wrongs themselves in order to offset the purported wrongs of those who were never tried in a court of law.

Who then will offer reparations to those wrongfully saddled with the cost of this political remedy? Do we intend to live in a land of law, order and due process, or do we intend to do only that which is popular? 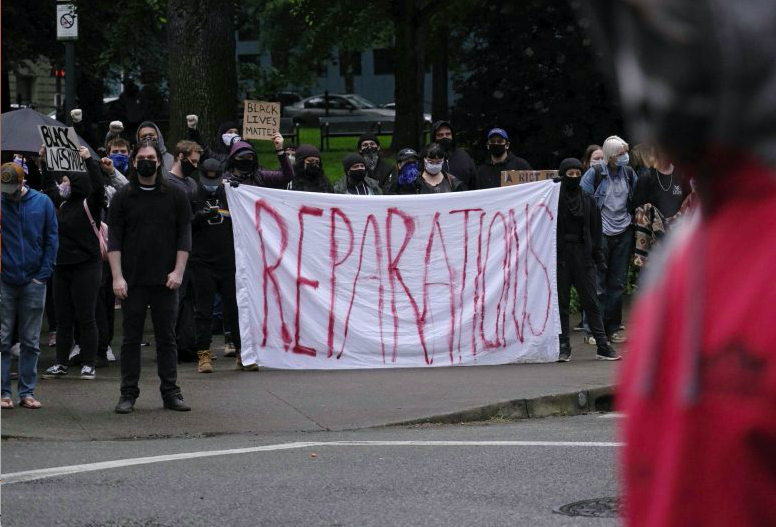 True merit is based purely on the performance of any individual, and the measurement of guilt is just the same. Any other form of social order serves to contradict reason, undermine due process, and promote social unrest. In the present case of proposed reparations for instances of slavery more than 155 years ago, we find a form of prejudice and discrimination devoid of due process, whereby citizens, the majority of whose ancestors didn’t even migrate to America until decades after slavery had already been abolished, are presumably found guilty on the basis of physically resembling the supposed perpetrators. Forgetting that such a proposal itself smacks of racism and prejudice, its champions seem to also ignore the fact that it also serves to implement yet another form of the very institution for which they are seeking reparations in the first place.

Interestingly enough, reparations were already served by the conclusion of the War between the States, whereby land formerly owned by Confederates was immediately distributed to former slaves; indeed, by June of 1865, promised forty acres and a mule, forty thousand freedmen had reportedly already been settled on four-hundred thousand acres of land. In addition to the immediate reparations even before the official end of the war, the South had already been ravaged by 1865, losing more than half of its wealth by the time of General Lee’s surrender at Appomattox. After the war, most Southerners returned home to squalor and virtually none of the wealth in the antebellum South has survived in any form to the present day.

The lot of the modern American has little to do with the wealth accrued or misfortune experienced by his ancestors even three generations ago, let alone 150 years ago. Wealth seldom survives that long: as the old saying goes, “shirtsleeves to shirtsleeves in three generations.” The station of the average American, who has virtually no savings or material wealth as is, stems not from inheritance but primarily from the nature of his work and the prudence of his budget.

Remarkably, the institution of government has, in the course of becoming unsustainably expensive, so starved its population of the fruits of their own labor that its constituents have become desperate to blame someone or something, however abstract or implausible. The shrewd American found liable is left then to question the validity of those bold claims and risk sounding insensitive or, otherwise, obediently accept that responsibility in order to fit in.

The average American, on the other hand, beneficiary and benefactor alike, mutually fails to see how this arrangement rights no wrongs and creates only more victims on the way to bigger and more powerful government. Perhaps most insidiously, it makes victims of people who would otherwise have the power and conviction to succeed of their own volition, who wouldn’t dare assume that their misfortune is predetermined or excused on the basis of their complexion, their ethnicity or the plight of ancestors more than a century and a half ago. Of course, government has no use for a constituency of capable freemen, unless they’re made to identify as victims ready to politically settle the score. Ultimately, the misdeeds of slavery cannot be corrected by more enslavement today. For that, the only practicable option has been and continues to be freedom, which is never a practicable option for government.

The convenience enjoyed by the current movement, one which presupposes rampant racism across the United States, is found in the price it personally stands to pay for being wrong: zero. Given the beliefs propagated through public schooling, that America is a country replete with racism, even where the movement and the protests are proven wrong by irrefutable exculpatory evidence, the court of public opinion will still respect the views of the protesters on the basis of believing that they have their foundations in some familiar truth which is neither visible nor evincible but assumed to be etched into the very fiber of their country.

What's more, it is conveniently offensive to only a small minority of people who concern themselves with the truth; otherwise, such claims of racism invite a sort of mutual appreciation society of people who mistaken the movement as a platform to broadly denounce racism, an agreeable notion nevertheless, when it really ought to center around justice and condemning verifiable examples of it. Of course, the average protester knows little of sober justice and reason, notions he'd readily rebuke as buzzkills at his political parties. Regardless of the irrefutable evidence and the insurmountable facts surrounding any case, the angry mob will scarcely tremble at the revelation of their collective myopia.

Whenever the protesters are wrong, they continue the protest around the abstraction or, in other cases, they're let off the hook for having sound intentions. Meanwhile, in his pursuit of the truth, the truth-seeker is held as calloused and coldhearted, at best, or guilty, at worst, for disagreeing, while he faces unlikely odds of vindication even upon the emergence of the truth, as the mob either continues its protest against the abstraction or otherwise forgets about it and moves on to another one. This is the brilliance of the thesis behind the current movement: it is virtually impregnable by design, incredulous to reason and impervious to truth.