Many in the history of America have likened the United States to a melting pot. Already in use as early as the eighteenth century, the term “melting pot” particularly gained in popularity after the 1908 play of the same name. 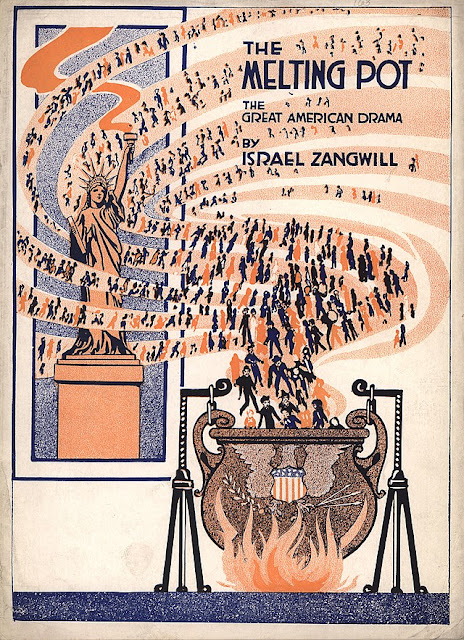 The term has come to describe America for generations, and it can continue as a convenient analogy so long as we account for its limits. After all, an analogy is useful only with consideration to limits and reason.

The challenge, then, is to determine the extent to which an analogy holds up, and where it begins to unravel. In the case of the melting pot, the analogy really serves only to communicate a principle: that America has, on balance, benefitted economically and culturally from a diverse blend of influences.

However, in the course of debate and political discourse, people are oftentimes paralyzed by the principle at face value, which numbs them to the kind of critical thinking which would otherwise call into question the veracity and applicability of the analogy, as well as the degree to which it holds up.

All too often, the principle, taken for granted at face value, precludes any further consideration with respect to degree or extent. In still other cases, the analogy conveniently obscures the risks and the tradeoffs.

In the case of the melting pot, America is celebrated for its various influences from abroad, economic as well as cultural, from the wide array of immigrants who washed upon its shores as they fled the Old World and sought greener, freer pastures in America.

While it is true that America benefitted from the confluence of these factors, it’s also true that the disagreement between cultures and ethnic groups also led to great strife between the people; however, where the country flourished, it flourished for the initiative of its people, who shared a lot more in common than they even believed.

For one, they largely appreciated the value of hard work, and they arrived upon the shores of America prepared to be the architects of their own lives and fortunes; and they prioritized their own families, their faiths, and their communities.

In this way, the assimilation to American culture long meant to embrace that initiative, hard work, personal responsibility and commitment to faith, family and community.

While the myriad cultural distinctions between Americans at this time weren’t insignificant, they were at least in mutual agreement over the most important of principles, in the very same way that a healthy diet is in agreement with the necessary components to sustain life.

Insofar as the melting pot analogy holds up, it is as a reference to the mixture produced by blending different ingredients, which together produce a healthy if not delightful combination. Of course, it is worth noting that this analogy, just as with its social counterpart, has its limits.

While not all combinations and mixtures can be made to work, not all beliefs and world views are practical. Similarly, not all social influences can peacefully coexist, and certain markers are available to us socially and economically to alert us to dysfunction, just as our senses inform us of the risk and palatability of food.

In this way, the objective of any melting pot, whether in the kitchen or in any proper analogy, is to facilitate healthy, stable combinations of ingredients that improve the quality and harmony of the entire mixture.

In the same way that only certain ingredients can be made to work in any mixture, just as exercise and diet can be made to work only in some kind of moderation, the social melting pot can be described in much the same way: where there is too much diversity or variety, whether in thought, competency or a particular lack thereof, it can be said that a society will suffer dysfunction in the same way bad food causes illness or indigestion.

Wherever the tell-tale signs emerge as evidence of a poor mixture, it is absolutely essential that the mixture be revised and reworked, that the signs of this dysfunction are heeded and continually inspire us to appreciate those limits and investigate what went wrong.

The lesson here is that we ought not to conclude that, where any principle or axiom is taken for granted, it must necessarily remain true everywhere and in the extreme.

While it can plausibly be stated that America has acted as a giant melting pot for peoples, customs and cultures from around the world, the country is not immune to dysfunction, and it will not benefit from every sort of diversity imaginable.

On the contrary, it is their agreement and the common ground which preceded those cultural differences that made it possible for them to peacefully and productively coexist in the first place.

In many cases, the kind of diversity which today distinguishes some people, or groups, is in the abstract or, in a similar vein, in the absurd. Whereas those cultural differences once meant minor or relatively innocuous differences in faith, tradition, superstition and cuisine, the differences which distinguish many today are in forms totally unhinged from reality, and completely born from a sense of confusion, inadequacy or outright contempt.

These are not only highly unproductive forms of “diversity,” but dangerously toxic forms to boot. They not only serve to compromise the health, integrity and safety of the individual who entertains these notions, but they pose a very similar risk to all of society at large. After all, society is not a static body of people; it is dynamic, susceptible to changes and influences of various kinds, not least of which those embraced for their diversity or uniqueness.

This is just to reinforce the point that diversity is neither the worthwhile objective of any process, system or society, nor the justified beneficiary of the melting pot analogy.

After all, the melting pot serves primarily to blend and to enhance, not merely to achieve complexity for its own sake, much less to embrace each possible ingredient. Indeed, if we're not careful about the ingredients, we'll be left with a melted mess.