With the DJIA closing at an all-time closing-bell high of 21,637.74, much fanfare surrounds the markets and the potential for Dow 30,000!

Is all the hype justified? And what does all of this mean to the average investor seeking returns for retirement?

This article points out the perils of U.S. equities and the real character and quality of the perceived boom.

The Dow tracks the price-weighted average of 30 large publicly-owned companies traded on the NASDAQ or NYSE. The index includes the likes of McDonald's, Boeing, American Express, IBM, Apple, Visa, Walmart, Microsoft and Nike, among others.

Along with the NASDAQ Composite and S&P 500, the DJIA functions as one of the major stock indices in the United States, representing the major moves of the trading day.

Today, the Dow is measured in the tens of thousands, stirring conversation around the possibility of Dow 30,000 during Trump's first term.

Of course, the figures are completely meaningless unless controlled for their comparative real values to reflect how much the index is worth in terms of the goods investors actually buy.

The following graphic depicts the gold-denominated price of the Dow Jones since 1995.

When measured against gold, the Dow is shown to have peaked at roughly 42 ounces in 1999, before the famed bursting of the information-technology bubble would eventually usher in the secular decade-long real bear market in stocks, rebounding only modestly since 2011, when gold eclipsed $1,900 per ounce. 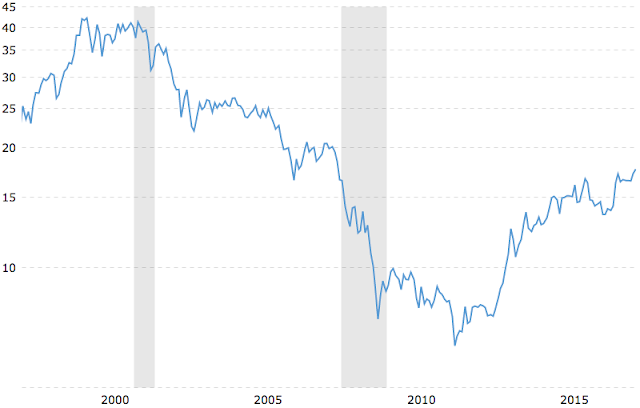 The gold-denominated price of the Dow today rests even below the real high of 1965, when the index was worth 28 ounces of gold, compared to a current ratio of 17:1.

It would later crash in 1974 to the level of 3 ounces to then rebound to 9 ounces in 1976 before plummeting to a single ounce of gold by 1980, at the end of a decade which witnessed the US dollar lose two-thirds of its purchasing power and Volcker's eventual interest rate hike north of 20% to remedy the out-of-control inflation which originally monetized the massive Cold War-era military industrial complex, the attending arms and space races, the nominally-popular war on poverty and the innumerable dependency programs spawning from the Great Society movement and Roosevelt's New Deal. 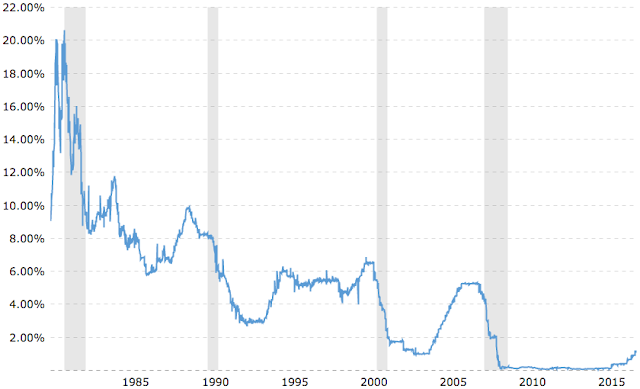 This would prove America's final bout of sanity as it would thereafter embark upon a decades-long war against the US dollar in a deliberate attempt to encourage debt and consumer spending over saving by incrementally driving down interest rates, guaranteeing or purchasing loans and debt-financing consumer behavior.

All of this was delivered at the continued expense of the US dollar, which would prove to lose an additional two-thirds of its value between 1980 and 2017, sacrificing at least one-third of its purchasing power between 1999 and today in the federal government's pursuit of engineering the wealth effect by way of buoying the asset classes of real estate and U.S. equities through the developed secondary mortgage market, artificially-low rates of interest and its practice of quantitative easing, the high-volume monthly purchase of US Treasury bills and mortgage-backed securities.

None of these crafty financial techniques has done anything to promote the actual production of valuable revenue-generating capital, as business investment has dwindled as a share of total gross domestic product, making way for increasingly greater sums of government spending and debt-financed consumption to comprise a metric which is more accurately characterized as gross domestic fantasy.

Instead, the United States has only taken on increasingly more short-term debt to finance the $2.5-trillion-per-year dependency system, the indefinite metaphorical War on Terror, the post-financial crisis bailouts, and the ballooning bubbles in real estate, student loans, auto loans, and consumer credit, the latter series of which has emerged to complement mortgage debt in eclipsing the debt-level heights of 2008.

The only difference is that the quality of current debt is inferior to the '08 variety, as mortgage debt has since yielded to a greater volume of auto loans, student loans and credit card debt that achieve nothing in the way of building equity.

And yet we appear to be partying as if it's 1999, as the DJIA-to-GDP ratio today nears its pre-dot-com-collapse high. Meanwhile, record-low interest rates and record-high levels of margin debt and stock buybacks continue to fill the punch bowl with still further forms of unproductive, non-value-producing investment chasing returns on the Yellen put. 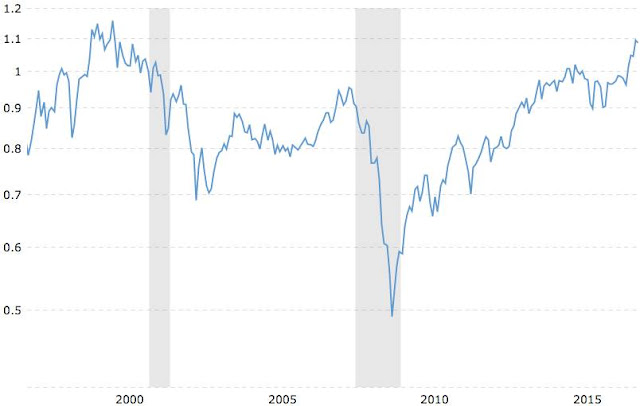 Meanwhile, Average US GDP growth across the most recent decade matches that of the 1930s, in the midst of the Great Depression, all while the personal savings rate has tumbled to 3% and the U.S. Dollar Index has fallen below the 93 level, marking a full 10-percent year-to-date loss. The last time the savings rate was this low, the United States was officially entering recession.

And as it turns out, the benefits of a booming stock market are heavily tilted toward the segments of the population that possess the excess capital to bid on the rally known today as the Yellen put.

In fact, according to the Federal Reserve and several surveys conducted by Gallup and Bankrate, roughly half of the American population has nothing invested in the stock market.

Meanwhile, approximately 10% of families own greater than 91% of all outstanding shares in a market environment wherein the gold-denominated Dow is worth roughly 60% less than its 1999 peak.

So while the Dow Jones Industrial Average has put on a spectacular show in nominal terms over the past several months, imbued by the frothy and ambivalent confidence of a Trump rally rooted in grandiose and ill-understood expectations, the long-term trend illustrates the real character and quality of what has only masqueraded as a secular bull market since 2009.

In the end, it's not the zeros that matter, but rather the goods and services you can buy with them.