September 07, 2017
Is anyone else repulsed by the phrase mandatory evacuation?

In the weeks surrounding the Caribbean's most recent bouts with hurricanes and tropical storms, a phrase that has become almost numbly parroted across the airwaves and during town hall meetings has been that of mandatory evacuations. 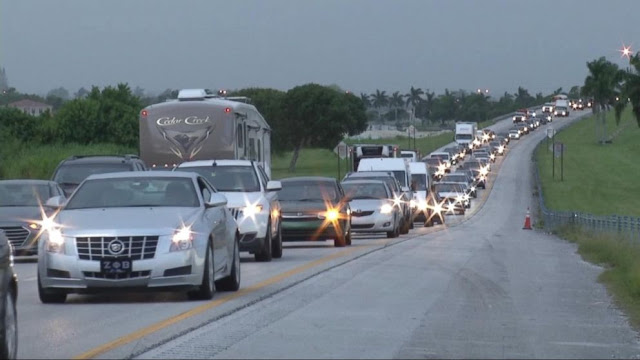 In these cases, public officials determine that the forecasted calamities are so threatening as to merit threatening their residents in their own way, by way of jail time or forced removal, if they refuse to vacate their homes and flee to a neighboring region of permissible habitation beyond the scope of their forecast models.

Sadly, this appears to only set further precedent by which government actors, seemingly always bursting with the warmest of intentions, will continue to encroach upon your personal liberties in pursuit of their own myopic agendas of righteousness and life well-lived.

The Weather Channel has even issued reports of police in Deerfield Beach, Florida, arresting homeless people and blocking access roads as part of mandatory evacuations.

If government can reach into your home and physically pull you out under pretense of your own protection, what will stymie its agents' further violations of individual freedom?

Where exactly is the limit of what government can and cannot do?

If people refuse to evacuate their homes when they are likely to face devastation or even sure loss of life, they are taking responsibility for themselves, whether intelligently or by default.

A mandatory evacuation implies that police officers might engage in mass arrests of those who elect to stay behind, perhaps due to their desire to protect their homes, to weather the storm or because they are simply unwilling to evacuate.

The potential reasons are nearly infinite.

The mandatory evacuation is a rather new post-Hurricane Matthew policy which merely serves the bureaucrats whose administrations might otherwise appear responsible for the deaths of dozens, hundreds or thousands of their residents who elected to ignore the warnings.

Is this sufficient to warrant an uncompromising order to require everyone to leave his or her home?

Are we free individuals or are we subjects of the state?

In 1887, President Grover Cleveland fought ardently in favor of the former, the cornerstone of freedom and the classic American ethos, issuing this statement following his veto of a mere $10,000 appropriation bill for the distribution of seed grain to farmers in certain counties of Texas that had suffered from drought:

"I can find no warrant for such an appropriation in the Constitution; and I do not believe that the power and duty of the General Government ought to be extended to the relief of individual suffering which is in no manner properly related to the public service or benefit. A prevalent tendency to disregard the limited mission of this power and duty should, I think, be steadily resisted, to the end that the lesson should be constantly enforced that, though the people support the Government, the Government should not support the people."

In the face of mounting resentment for political inactivity, President Cleveland remained steadfast to his principles, embodying every inch of yet another one of his under-appreciated quotes:

“What is the use of being elected or re-elected unless you stand for something?”

President Grover Cleveland was a man of principle who might well serve his political legatees, if only they observed the portents of history.

Unfortunately, there are plainly far too many eyes on mainstream and social media for the modern bureaucrat to escape the limelight.

Commensurately, there exists this popular perception that there are simply no excuses for the almighty United States to refuse disaster relief to any shore, nook or cranny of the roughly four million square miles which comprise its borders.

The blind supporters of government aid are also conveniently blind to the limits of the government's budget, the ways in which it distributes capital, the long-run economic ramifications of government intervention, and the bleakness of the emerging national debt crisis.

So when government acts, it does so under the veil of compassion, dressed in thousand-dollar three-piece Brooks Brothers suits, at the applause of the hype-addicted media and the naive populace.

Ultimately, you know you have a problem when freedom and mandatory evacuations find a way to coexist in popular culture.

It is truly a pathetic day in America when you literally cannot stay home without breaking the law, and an even worse one when this is enforceable through the implied support of that entire nation.

This is precisely how the Orwellian slogan freedom is slavery creeps into our world, not overnight and brutishly, but incrementally and with the unanimous endorsement of the unknowing slaves.