September 28, 2017
Until 2009, the players of the National Football League (NFL) would remain in their locker rooms until well after the playing of the national anthem.

As it turns out, during the 2009 NFL season, the league began mandating that players stand at attention and face the flag during the playing of the anthem.

What's more, in 2012 the Department of Defense (DoD) began shelling out millions of dollars to teams for participating in the on-field ceremonies, rendering the players near equivalents to the gladiators of the Roman Empire.

You might remember Russell Crowe shouting, "Are you not entertained?" 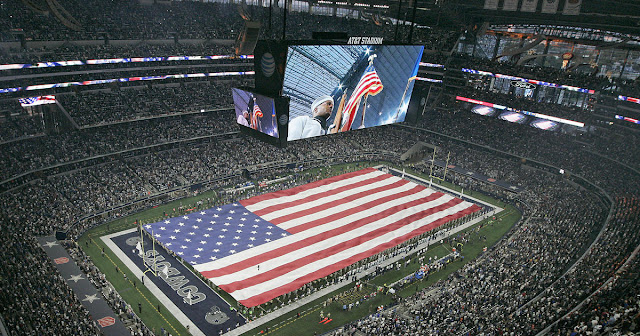 As teams began participating in the ceremonies, a seemingly-innocuous expansion of the propagandizing presence of the metastasizing political machine, the well-intentioned players and the adorning heritages of their teams tacitly attached themselves to the new, uniquely American form of patriotism, unquestioning patronage to the sacred flag and all things with the US label slapped to them.

At this juncture in American history, blissful sponsorship of the American Leviathan finally marked the completion of a long odyssey of displacing the original American ethos of unrelenting suspicion of government to instead pay favor to the warm and fuzzy feelings of passive celebration.

The most ubiquitous misconception within the United States has become its inhabitants’ implied and overt acceptance of its government as the chief originator, and the more-than-symbolic embodiment, of the qualities which make it great.

This is categorically misleading and patently incorrect.

The spirit of the United States, rooted within its founding documents, is the people’s will to restrict the influence of government and to relegate all material matters to local and personal jurisdictions, where freedom and meaningful political participation can mutually coexist without material consequences being ceaselessly cast across the lives of remote opponents.

This is the essence of the Constitution of the United States of America, a document penned not to empower the federal government, but to limit its reach through enumerable powers and to preserve liberty and sovereignty at the local and personal levels.

So the uniqueness of the United States government had been linked to its founders deliberate commitment to limited influence and its preservation of liberty, not the aggrandizement of their own powers to achieve the politically-popular ends of the day, an evolution which would invariably ensue across the years and generations between then and now.

And if there had been any shred of value in the flag which flew over that nation of meager government involvement, it was precisely because of this level of government that the flag began to symbolize freedom and its byproduct of opportunity.

For what is a flag beyond its mere representative qualities?

It is a composite of interwoven colors splashed onto cotton or nylon in an arrangement which harkens back to the venerated traditions of a glorified past.

In the case of the United States of America, there have been innumerable flags to carry the distinction of representing the people and government which comprised its borders.

It is perhaps the consolidation of people and their battle cries which has proven the greatest achievement of the flag.

People are always in search of celebration and a common battle cry.

Whether it is Remember the Alamo, Remember the Maine, Remember Pearl Harbor, Remember 9/11 or something more uniquely personal, the collective memory develops an ironclad association with an abbreviated history of circumstances cloaked by the radiant ramparts of patriotism and observed through the rose-colored lenses of exceptionalism.

But what is it that really renders the United States exceptional?

Is it that cohorts of people sacrifice their lives for the flag?

Indeed, hardly anyone in the armed forces fights or dies for freedom, much less for a flag, an anthem, core democratic values, or anything else which widely appears on bumper stickers to render the reprehensible more palatable.

It is rather an uncompromising commitment to duty, for the purposes of one's family or the camaraderie of his or her unit, which enables this mighty sacrifice of self.

Those who have endured basic training will likely recall these hallowed words of one Father Dennis Edward O'Brien:

"It is the soldier, who salutes the flag, who serves under the flag, and whose coffin is draped by the flag, who allows the protester to burn the flag."

The freedom fighter then is the one who imperils himself for the security of even its most reprehensible expressions.

Freedom is inextricably rooted within the unknown, the potentially-unstable and the threat of discomfort.

Its price is the risk of failure, as freedom never promises anything.

In a free world, no one is naturally entitled to anything beyond the forces which organically compel the aversion to that risk.

The greatest threat to freedom then is the aspiration to define its terms, to snuff out the discomforts and inconveniences which attend its expression.

It is within these very moments of displeasure when freedom is tested, and with it the patience to endure the quest to preserve it for posterity.

As founder Benjamin Franklin once wrote in a 1755 letter on behalf of the Pennsylvania Assembly, "Those who would give up essential Liberty, to purchase a little temporary Safety, deserve neither Liberty nor Safety."

In simple terms, an employee can protest or behave however he or she pleases, while a free employer can likewise exercise his or her own discretion in response.

One is then free to express himself and in commensurate measure susceptible to the consequences attending thereto.

"I totally believe the league, the owners and the players have been played as pawns on both sides of the political fence to continue to divide an already divided nation."

One of the most remarkable distractions in this world has been that which has impelled people to debate the subject of who ought to be at the political controls, instead of condemning the controls themselves.

And in pursuit of political righteousness, the debate has moved from the forum of determining what constitutes allowable government action to what form that government ought to take, altogether neglecting to keep that government in check as it has drifted toward total control over our daily lives and the formal economy.

Upon exiting the Constitutional Convention of 1787 in Philadelphia, a group of citizens asked Benjamin Franklin what form of government the delegates had created. He answered, "A republic, if you can keep it."

In summary, the banner of the United States of America, its stars and bars, has draped over the coffins of hundreds of thousands of casualties of war in support of the military-industrial complex and the corporatist agenda, while the same label has applied to the authorization of innumerable war crimes, mass genocides and internment, decisions in favor of slavery, covert coup d'état and false flag operations, large-scale imprisonment of non-violent, victimless criminals, systematic incarceration of political prisoners, and countless regrettable wars of aggression against indigenous persons for the acquisition of their land, resources and strategic advantage.

So when you stand, sit or kneel for the national anthem, do it with the backing of the full range and depth of history in your mind, reminding yourself that your opposition is the manifest expression of the freedom which each of us cherishes yet all too often takes for granted.