A Runner's Schema of the Marginal Income Tax 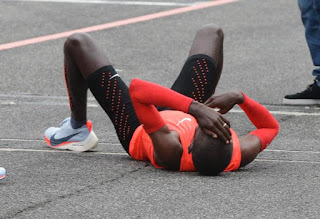 It’s funny how such a basic economic concept as marginal wealth confiscation can be so succinctly summarized by its mere application to sport: assume that you have a pool of athletes who are vying for the grand prize of $1,000 by achieving the 4-minute mile.

Any athlete who completes the event under 4 minutes will be awarded $1,000. What do you suspect will be the prevailing outcome?

My suspicion would be that each of the runners would compete wisely enough to finish the race within a close margin of that 4-minute mark.

The reasons here are simple yet multi-faceted: the runners would benefit from group running by distributing the lead responsibility and reducing wind resistance and perhaps incidentally relieving themselves of the laborious task of pace monitoring, while limiting their exposure to downside risk (of exhausting themselves and failing to finish) by maintaining the minimum pace that would qualify them for the prize.

Of course, this phenomenon is often traceable in obscure races where organizers reward runners for breaking previous course records.

In these cases, perennial winners will wisely improve those records by small increments to secure a relatively easier task for next year.

Now, in the case of the $1,000 prize, many runners may qualify for the purse, yet all of the runners will have been deprived of any incentive that would have otherwise encouraged the realization of their fullest potential on that day.

This is an illustration of the rational actor model and the law of least effort, which in tandem suggest that individuals are inclined to maximize marginal benefit with marginal effort.

The effect of such a marginal discouragement on attainment in the market economy, however, is far more practically perverse than the consequences attending foregone opportunities in a given athletic event.

In this case, the wealth of individuals is confiscated, redirecting the funds in such a manner as to satisfy remote, specific demands with scarcely any residual or measured benefit passed on to the original producers who merited the accrual of said wealth in the first place, passively resulting in the downgrade of the unit of account in which the transactions had been denominated.

What’s more, the marginal rate of confiscation, as it approaches 100%, will distort the comparison between risk and reward beyond that threshold which is magically pulled from the magician’s hat with an attitude of righteousness.

The unintended, or unheralded, consequence of this scheme is found in the inherent discouragement of personal or financial investment in ventures that might otherwise produce long-term gains for people whom the principal doesn't even know.

As such, the scheme will ultimately prove to undermine the appetite for success which would necessarily follow the perceived gains which originally merit the risk and self-sacrifice required for its fruition.

So, in the end, the general outcome of any scheme which intends to limit the incentives on high achievement will necessarily limit the materialization of such achievement. And the worst part of all of this is the unrealized potential that is instead exhausted or ignored in support of politically-palatable projects which look good on paper and sound good from the podium.