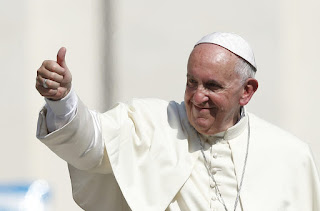 "Through meritocracy, the new capitalism gives a moral cloak to inequality, because seeing gifts as merit, it distributes advantages or keeps in places disadvantages accordingly. Under such a system, the poor person is considered undeserving and, therefore, guilty. And if poverty is the fault of the poor, then the rich are exonerated from doing anything." - Pope Francis

The 80-year-old Pope released these statements this week as he condemned the business world for becoming less entrepreneurial and more speculative, also citing an apparent confusion between merit and gifts in the workplace, where he claims that these merits would be better characterized by the privileges enjoyed by those who have benefited from greater talent, education and being born into a family that is not poor.

Now, let's give credit where credit's due. This may be the single most ignorant statement ever issued on the subject of economics. And for this reason, Pope Francis may have merited serious consideration for the Nobel Prize, as recent winners of the prize have proved to be just as illiterate on the subject.

First of all, the paradigm of pure capitalism has become increasingly extinct from the surface of this planet. In the Western world, with the United States leading the parade, it has largely been supplanted by a veiled variety masquerading under a highly-distorted and only nominally-similar title: crony capitalism or corporatism.

So when the Pope speaks on matters pertaining to the vile ramifications of a capitalistic meritocracy, he actually admits a failed understanding of the concept he has taken to scrutinizing.

Whereas capitalism permits a free exchange of capital and labor, and an individualized approach to the assignment of value thereto, with a residual outcome of distributed gains and localized losses, crony capitalism intends to collectivize losses and specify gains through the exercise of the clout of government, an agency diametrically opposed to free enterprise and voluntary participation, to promote the interests of the well-networked few and insulate them from the competition which intends to displace them, all while systematically requiring total participation in the process.

Moreover, the Pope here falls victim to the fallacy of the fixed-pie narrative, a failure of logical sequence which has plagued many before him and will seemingly continue to do so into perpetuity.

The market economy offers not a fixed pie of goods and services, but rather a dynamic infrastructure through which further supply and economies of scale have produced increasingly improved designs for the creation of capital, goods and incidentally services which tend everywhere to competitively drive down the general prices of goods to disproportionately favor the middle-to-lower-income groups who would otherwise struggle to afford that which was once affordable only to the upper tiers of the economic spectrum.

Here the Pope also fails to recognize that no individual, whether definitionally rich or poor, possesses an inherent responsibility for the ill-defined wellbeing of his or her counterparts -- this is the essence of liberty, whereby no one is a servant to his or her fellow individual, irrespective of his or her rank or identity.

Oddly enough, the unencumbered market yields riches only to those who have economized their modes of production to produce goods and services which are relatively more competitive than the alternatives available to those whose real demand, from the satisfaction of this elsewhere, and time horizons coalesce to warrant the temporal exchange of goods and capital, effectively producing the residual effect of allocating capital where it is most highly valued and efficaciously utilized, as determined by the interpretable language of the price system.

Of course, the property owner need not sell any of his or her property, nor is any individual required to purchase any of his or her products. It is only by the mutual satisfaction of wants, magnificently and reliably facilitated by the advent of money, that such exchanges take place. Therefore, it is only by the voluminous satisfaction of wants that any individual will amass those enviable sums of wealth that have popularly become the subject of such sharp scrutiny in the forum of political debate and in the sermons of well-intentioned servants to an abstract authority, both of whom all the while stand to profit handsomely in their own unique forms.