Affordable Housing: Transforming the "American Dream" Into A National Nightmare

January 18, 2018
According to Melora Hiller, CEO of Grounded Solutions Network, "Community groups are looking into community land trusts as a tool because the affordability crisis all over the country."

Hiller goes on to confidently claim, "Part of the reason is that markets have been left to do what markets do, which is to go up or down at will."

The CEO then stamps her airy sales pitch with her firm's mission: "The community land trust is really trying to take the house out of that kind of up and down and keep it in a more stable situation."

First, markets have simply not been "left to do what markets do."

And no, free markets don't naturally "go up or down at will."

That's purely a function of what is called "supply and demand," a phenomenon that government has, once again, distorted with a variety of restrictions and regulations, with pernicious support from its widely-reported low issuance of building permits, record-high volumes of subsidies and a complementary easy monetary policy that works to keep that credit churning. 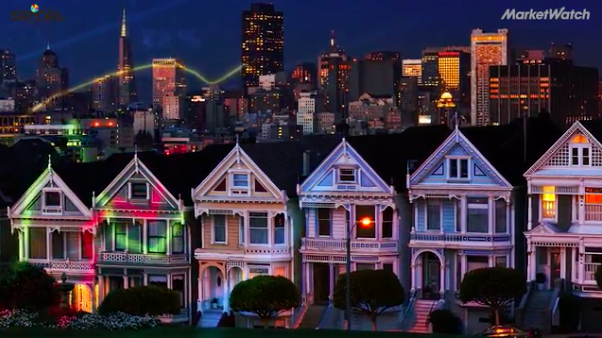 The only sustainable way toward permanently-affordable housing is through a motivated and unfettered population with the capacity to build more units to accommodate residents who are productive in their own respective capacities.

There's no easy way around this: home prices need to collapse in order for homes to become sustainably affordable again.

They aren't rendered more affordable in the long run by ambitious measures intending to extend credit to otherwise-unqualified borrowers.

This merely further falsifies the market's prices by undermining the pressures which might otherwise reset the equilibrium price of real property.

In Hiller's video, entitled This is what happens when homes are made permanently affordable, the audience is exposed to a very real and astonishing graphic: "63.4% national homeownership rate is the lowest since 1966."

Hiller then returns to describe community land trust (CLT), a "non-profit organization that serves a specific community, generally, and they have a board that's made up of people from that area who have a vested interest in having permanently-affordable housing."

According to Hiller, they accomplish this end by "either acquiring or building or renovating a home, and when they sell that home, they are selling only the home itself."

The kicker: the CLT retains ownership over the land.

So what we are truly witnessing here isn't a purely compassionate phenomenon, but rather an alternative, and candidly backward, set of criteria administered in determining the way real property is exercised.

Instead of opening the bidding to all qualified candidates, the CLT virtually monopolizes the process through discriminately narrowing the qualification criteria to a more arbitrary set of conditions, effectually ostracizing productive workers to the specific benefit of others whose reported incomes are merely less enviable than those of their rejected, politically-unimportant counterparts.

In summary, this agenda is pure discrimination dressed with the trappings of seemingly-sound intentions.

As it turns out, many people are making the appropriate decision by renting, as they are ambivalent about location and their tenure within their respective career fields.

Moreover, many renters cannot count on stable inflows of income, so locking into a mortgage, or more literally a death pledge, is probably the least suitable decision for them.

Buying a house is a long-term, serious commitment that isn't perfect for everybody. Just like any considerable investment, it is incumbent upon the buyer to assess his short-term and long-term plans and specifically ascertain how this decision fits within them.

Artificially lowering, or altogether eliminating, these barriers will prove only to exacerbate the gravity of this predicament in the future, depriving the decision-maker of his former opportunity to conduct serious due diligence before committing to a load of responsibilities that he neither really wanted nor objectively considered plausible or suitable over the long run.

In the end, this is yet another self-aggrandizing project operating under the guise of compassion, which the state happily sponsors through non-profit certification.