What "Molly's Game" Teaches Us About Income Inequality

It is astounding how many causal clues for related statistical outcomes can be ignored when audiences are staring at them for two hours and twenty minutes of runtime.

In the buildup of the world's most exclusive high-stakes poker club, inclusive of the likes of Matt Damon, Ben Affleck, Leonardo DiCarprio and the since-reviled Tobey Maguire, Molly Bloom demonstrably capitalized on the unique services she offered as a motivated and intelligent woman.

In the incipient stages of what would eventually become a multi-million-dollar gambling ring, Molly leveraged attractive looks and clever wit to charm wealthy men into staking enormous sums of money to join her prestigious club and seek out sexual gratification with seductive hostesses. 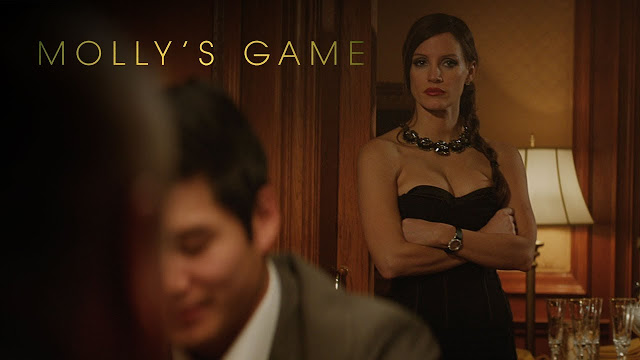 For Molly, this happy habit didn't begin with poker games.

In a desperate attempt to find herself, Bloom decided to move from Colorado to Hollywood in 2001, wanting to take a year-long hiatus from school and professional skiing before matriculating at law school.

Her parents, disapproving of this decision, elected to sever their financial ties to their daughter, allowing her to sink or swim of her own might on this wild adventure of hers.

This is when Bloom picked up cocktail waitressing to make ends meet, where she would begin polishing her charm to excite men into indulging themselves with high-priced vodka after captivating them with hollow hopes of connecting with the club's beautiful women.

After a short time, Bloom would eventually meet a real estate investor requiring an assistant.

This is where she would get her first glimpse of high-stakes poker, and with it a chance to negotiate her way into the celebrity universe.

Along with her roles at the real estate office, Bloom would organize weekly celebrity poker games at the world-famous Viper Room in West Hollywood.

This would become her life, and eventually her unwinding.

As she grew into her role, Bloom recognized the enormous profit potential of inviting affluent men to spend a night amongst fellow high-rollers and high-profile celebrities.

Originally, her earnings depended upon the handsome tips of these generous magnates: Molly's future cash cows.

Of course, these men were delighted to accept these invitations, and I'm sure the provocatively-dressed women hardly diminished the experience.

Soon enough, Bloom had amassed a sufficiently vast network of well-to-do celebrities and businessmen that she set out to run her own games, setting up tables in opulent hotel suites at the Beverly Hills Hotel, the Peninsula and the Four Seasons.

Molly Bloom officially became the host of the hottest game in town, and she calculatedly insured herself against all of the game's risk by raking in tips and, eventually, a percentage of the pot.

Bloom essentially afforded herself exposure to guaranteed, and often-artificial, winnings by taking cuts and cunningly extending credit to players on a form of voucher system.

This means that Bloom would grant certain players false credit in a game wherein others had risked real money, upping her own chances of bringing home her guests' money.

She would later lose a majority of her remaining earnings after the FBI eventually raided one of her games, shut down her ring and seized all of her money.

So while Molly's game had taken her to the crest of the celebrity world, the crash to rock-bottom would prove just as brilliant and the myriad lessons equivalently profound.

In this case, we bear witness to a specific showcase of gender dynamics, where select men exemplify their appetite for elevated risk and competition, whereas select women avoid the risk to complement the game with a special style of service.

While scores of men frequented her games, Bloom's female accomplices, commissioned for their referrals, took on none of the downside risk to profit handsomely by initially leveraging their scintillating looks to attract men to the game.

As told, Molly then smartly devised her own game to win over the clientele of her previous boss, who had originally employed Molly to run his office and operate his high-stakes poker games.

So while Molly's daily earnings may have trailed those of each day's overall winner, her total cut was completely insured against any loss (in the scope of the game), and she never had to risk any of her personal capital in the process.

And even during start-up, Molly merely invested earnings previously acquired through generous tips from risk-taking bettors.

So while many millions of dollars were exchanging hands and while winners were taking heaping sums, many losses were also amassed. Yet Molly Bloom made sure to never partake in them.

Ultimately, the outcomes of this world are often at our fingertips to be patiently understood.

These outcomes, however, once distilled into numerical representations of human phenomena, fail to encapsulate that still very human narrative.

In the majority of cases, and across history, men have taken on riskier tasks while women have assumed safer and more predictable roles for the household.

So while this trend may eventually fade over time, with the advent of automation and the continued distancing of individuals from the fields of grueling labor, civilization has not quite arrived at that station in world history.

And even when that time appears to be upon us, there may always remain shreds of preferences among us rooted inexplicably in traditions that we neither adequately explore nor fully understand.

And these unexplored factors of our lives underscore the differences that pundits misrepresent when they're merely aspiring to stir up debate or appeal to an audience.

As the old adage goes, there is always more to a given story.

In fact, when comparing like jobs instead of mere averages, and after accounting for experience, credentials, hours worked, continuous time in the labor force, and marital and child-bearing history, the widely-reported income gap begins to vanish.

As illustrated in my aforementioned article, this is further evidenced by stock market participation, whereby risk attitudes, education, and financial literacy prove valid predictors that are also statistically associated with gender.

So while there are preferences, skill sets and character types which are found to be distinctly correlated with gender, one cannot ignore the real-world outcomes stemming from these differences.

In the case of Molly Bloom, we observe an individual who knows how to capitalize on the numerous associated advantages with which she has been endowed as a woman.

The average viewer doesn't castigate Bloom for accepting cash from men who have just lost astronomical sums of money; instead, that viewer is more likely to envy the ease with which she generated that income.

All the while, there are real (and often-unaccounted) risks incurred in playing these games, and more broadly in the performing of life, which are typically ignored while calculating average differences between people, independent of their respective stories as individuals.

In summary, men and women are self-evidently endowed with certain biological, hormonal and anatomical differences which bear a range of distinctions in the way they live their lives.

It is reasonable then to expect that there may be some differences in the ways individuals prioritize their time and earn their money.